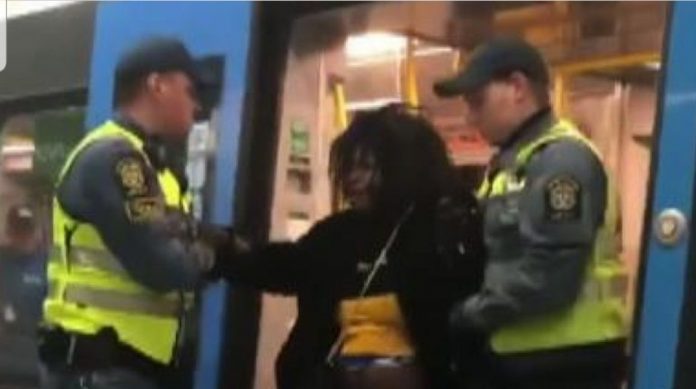 01 February 2019, Stockholm Sweden. Two security guards have been suspended after a pregnant mother was hurt while being forcibly removed from an underground train in Sweden.

The woman was with her five-year-old daughter at the time of the incident at the Hotorget station in central Stockholm, where officials dragged her on to the platform for allegedly travelling without a valid ticket.

Footage of the confrontation has gone viral on social media, sparking debate over accusations of racial profiling by police and security personnel.

An investigation is under way to determine whether the staff in the clip are guilty of malpractice or assault, and if the woman – who has insisted she had a ticket but could not find it – is guilty of violent resistance.

She has twice checked into a hospital in Stockholm since the incident on Thursday night – first in the aftermath, and again on Friday to make sure that her pregnancy had not been affected.

She claims security guards “immediately grabbed” her upon telling them that she could not find her ticket, having already told them she could not leave the train because she was tired and in pain.

In a video shared widely on Instagram by activist Lovette Jallow, the woman’s daughter can be heard screaming and crying as she watches her mother be pinned to a bench on the station platform.

Last week in Parliament in Samoa, Fa’asaleleaga Member of Parliament, Gatoloaifaana Amataga Alesana-Gidlow called for Government to develop a set of compulsory minimum standards for security guards saying that in some instances, security guards are the cause of fights and disruptions at night clubs.