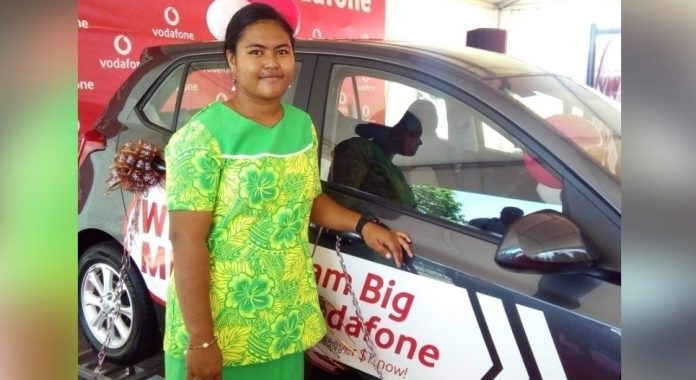 It was a dream came true for a 17 year old school girl from Manono Uta who took home the second Vodafone “Dream Big” promotion vehicle.

Ruta Ioane, a Year 11 student at Wesley College says it is all so unbelievable, and thanked God for this most amazing White Sunday gift for her and her family.

Her grandfather, Pesefea Manaia was representing Ms Ioane to spin the wheel for the 5 selected winners to take the second car home.

These five winners were given the chance to pick a number from 1-5 and whatever number they’ve picked is their chance to spin the wheel.

Ruta’s grandfather had a double portion of luck as he picked the number 1, meaning he would be the first to spin the wheel.

The crowd watched in anticipation as Pesefea spun the wheel for his granddaughter, only to have it stop right on the Winning Car!

Pesefea said, “I am shocked, I am speechless to express how I feel about this lucky gift that I and my family have received,” he said.

Pesefea says his granddaughter who is the true winner of this car, loves to use Vodafone’s service and buys data bundle promotions.

Pesefea acknowledged the giving hand of Vodafone to the general public through various promotions, and says they would continue to support Vodafone’s fast and reliable service in the future.

Ms Ioane says she receives overseas top-up from her dad who is currently in New Zealand, and every week since the Dream Big promotion, she spends $7 tala on her data bundles.

“I can’t thank Vodafone enough for this special gift for my family. I will continue to be a Vodafone customer and fan, this is truly the best network for internet connection,” Ms Ioane said.

This second car is one of three Brand new Hyundai Grand i10’s up for grabs as main prizes for the Dream Big, Win Big Vodafone promotion.

The last car will be drawn at the beginning of next month.

Vodafone CEO, Nofoasaefa Satish Sharma says Vodafone promises to deliver the best internet services to Samoa and is the only network to provide 24/7 call centre services for the general public.

The other four winners received cash prizes starting of up to $500 tala.