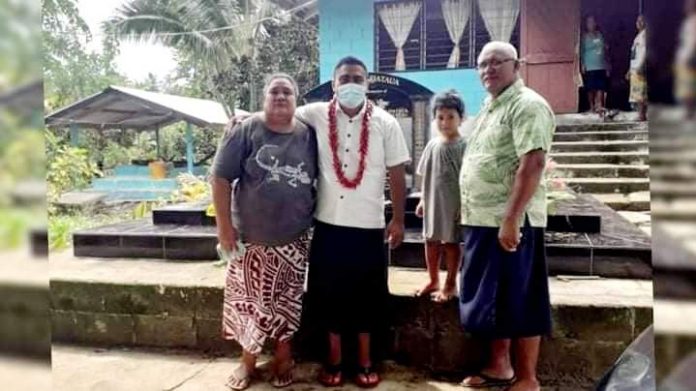 Thursday 28 April 2022, Apia Samoa. In these times of Covid-19 and uncertainties with travel especially in and out of Samoa, a seasonal worker preparing to leave on yesterday’s flight shared how difficult it was to say goodbye to his family this time.

More than 100 men and women departed Faleolo Airport Wednesday afternoon for Australia to participate in the Seasonal Workers Programme (SWP) coordinated through Samoa’s Ministry of Commerce Industry and Labour (MCIL), and the Pacific Labour Mobility Assistance Program (PLMAP) of Australia.

Speaking to Samoa Global News before departing, 27 year old Onesemo Niuumu Tupua from Samatau says he says although he is very grateful for opportunity to work abroad – this time, he says goodbye to his parents with a heavy heart.

“It has not been easy saying goodbye to my parents today, especially since we had to say goodbye at home with covid restrictions, they couldn’t be at the airport,” he said.

“This time with so many unknowns and not being able to fly home for emergencies or if anything happens..”

It is not the first time Onesemo has been able to participate in the seasonal workers programme, but he says saying goodbye to his family especially his parents, never gets any easier to do.

“Especially at these times of Covid-19, where it is not easy to return home if something happens to my parents.. and also my siblings.. I’m really close to them, and it’s hard to say goodbye..”

The flight was supposed to depart on Tuesday evening, however, it was postponed and did get away safely before 6pm Wednesday afternoon.

Onesemo says his parents, Niuumu and Maima Tiumalu, are his “why” and his main motivation for making the sacrifice of being away from home to earn money for his family’s development.

“I know I will miss my family a lot, but this not an opportunity we can pass, especially for me as the eldest child, to do my part in helping to develop my family and help my parents,” he said.

“There are two of us boys – my brother is after me, and our only sister is the youngest..”

Onesemo says this is not the first time he will be placed in Australia, and he has also been to New Zealand in previous years. With his good record, he has built a reputation and favoured by employers. He says the seasonal worker opportunities, both under Australia’s SWP and New Zealand’s Recognised Seasonal Employment (RSE) scheme have benefited his family immensely and helped put his younger siblings through school.

Onesemo is articulate as he speaks about the workplaces he has been placed in before.

“In New Zealand, I worked for SCENIC Hotel at Franz Josef Glacier in 2019 to 2021, and I have also been posted to Perth, working for Harvey between 2015 to 2018 ,” said Onesemo of his prior experience.

Working conditions under the employment schemes came under the microscope in February this year, when an Australian Federal Parliamentary inquiry was launched into allegations of worker abuse and unacceptable employment and living conditions for Samoa and other Pacific workers.

Onesemo says he has never experienced such conditions as conveyed by some workers whose testimonies were widely publicised in interviews with the Job Security Select Committee of Australia’s Senate.

“The groups I have been attached to have always been well looked after by all the employers I’ve worked with, not only in Australia but also New Zealand.”

“There are altogether 22 of us heading to Harvey Beef in Western Australia,” says Onesemo. “There are 8 females and 14 males in our group.”

“I know that all of us will find it hard to leave Samoa today, and all of us will miss our families, but we rely on God for his strength to cope not only mentally, but with the work that we will be given to do when we arrive.”

According to Onesemo there are more than one hundred of them leaving today for Australia, each of them thankful to God for the opportunity, and also grateful to the Government’s of Samoa and Australia.

The Seasonal Workers Program (SWP) was launched in July 2012 after an interim pilot phase. Similar to the New Zealand based RSE program, SWP was designed with the intent that it would become a vital tool for meeting the needs of the horticulture industry for recurrent labour, while also contributing to the economic development of participating countries such as Samoa, but also includes Fiji, Kiribati, Nauru, Papua New Guinea, Solomon Islands, Timor Leste, Tonga, Tuvalu and Vanuatu.