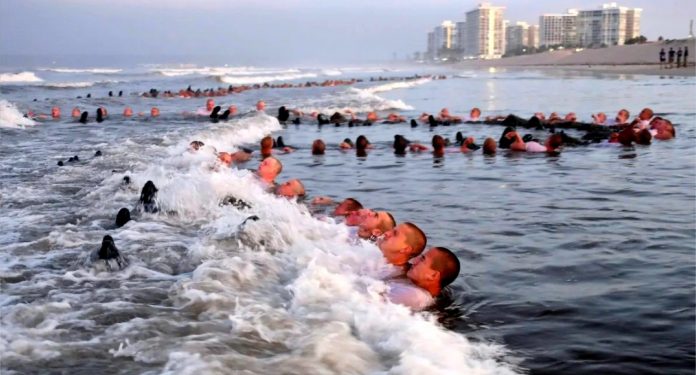 Kyle Mullen of Manalapan, N.J., was one of two trainees who were hospitalized after completing several days of training outside San Diego.

One Navy SEAL candidate died and another was hospitalized after completing several days of excruciating training known as “Hell Week” in Coronado, Calif., Navy officials said on Saturday.

Navy officials on Sunday identified the seaman who died as Kyle Mullen, 24, of Manalapan, N.J. “We extend our deepest sympathies to Seaman Mullen’s family for their loss,” Rear Adm. H.W. Howard III said in a statement.

Neither Seaman Mullen nor the other trainee, who was not immediately identified, was “actively training when they reported symptoms and were transported” for treatment, according to the Navy’s earlier statement. Seaman Mullen was taken to the Sharp Coronado Hospital, where he died on Friday; the other trainee was in stable condition at the Naval Medical Center San Diego.

The cause of Seaman Mullen’s death was unknown and an investigation was underway, according to the earlier statement.

Training to join the Navy SEALs is notoriously grueling, and earlier deaths and injuries have raised safety concerns.

In 2016, the drowning death of a SEAL trainee, James D. Lovelace, was ruled a homicide by a medical examiner because an instructor twice pushed him underwater, in violation of Navy rules, after another instructor appeared to point out that Seaman Lovelace was struggling. In the same year, a seaman who dropped out of the SEAL training program after its toughest part — a 50-hour period without sleep — died by suicide.

During Hell Week, recruits endure several days of running, swimming in the cold surf and rolling in mud, and are allowed only a few hours to sleep. Hell Week is just “part of the first phase” of the assessment and selection process for the SEALs, according to the Navy statement. There is also six months of underwater demolition training in Coronado, near San Diego.

The SEALs — the term stands for Sea-Air-Land teams — are among the most elite and storied forces in the United States military. In 2011, members of SEAL Team 6 carried out the raid that killed Osama bin Laden. The SEALs were created by President John F. Kennedy in 1962 to expand unconventional warfare and have roots stretching back to the underwater demolition teams that cleared beaches and laid mines during World War II.