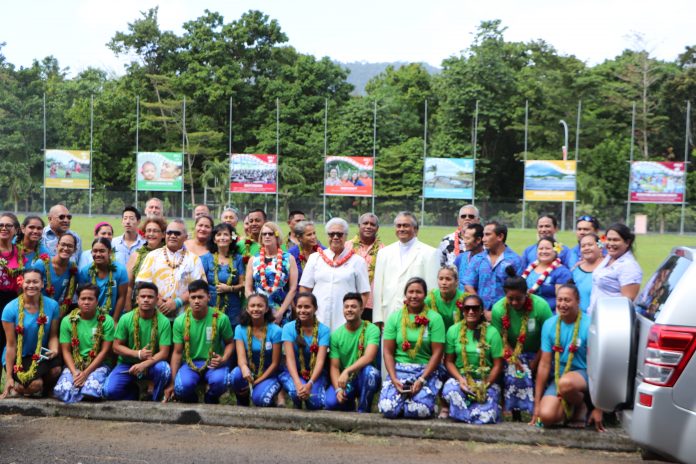 03 July 2019, Apia — In keeping with its role as the integrator for the Sustainable Development Goals or SDGs, the United Nations Development Programme, UNDP in Samoa today launched localized banners for the SDGs, featuring local people and places in Samoa, Cook Islands, Niue and Tokelau.
The SDGs have their standard icons, but all countries are encouraged to localize the SDGs in a way that will appeal to their people and drive the message home.

UNDP has done this in partnership with the Ministry of Natural Resources and Environment, as reflected in today’s launch which is held to coincide with the upcoming Pacific Games.

Images are used to portray the 17 SDGs, which is a set of development goals that countries have committed to achieve by 2030. The Goals are a to-do list for people and planet, and a universal call to action, in the quest to wipe out poverty, fight inequality and tackle climate change.

At the launch, keynote speaker, Deputy Prime Minister and Minister of Natural Resources and Environment, Fiame Naomi Mataafa, spoke about the importance of collaborative efforts to ensure the Goals are realized.

“Samoa as a Small Island Development State, SIDS, faces challenges with SDGs as it is not easy to involve and engage everyone to contribute in achieving these goals. The implementation of the SDGs will require significant financing recourses: public and private, national and international. All the SDG goals are aligned and linked to the Strategy for the Development of Samoa, SDS, priorities and key outcomes,” said Fiame.

“The SDS clearly establishes the commitment of the government towards the development of the country. The government will continue to contribute in building an improved foundation of life for all Samoans as stipulated in the long-term vision of “Improved quality of life for all,” along with the theme of “Accelerating sustainable development and broadening opportunities for all.”

Fiame also acknowledged the partnership with its partners including UNDP.

Ms. Valerie Cliff, Deputy Regional Director of the Regional Bureau for Asia and the Pacific in Bangkok, was on hand to provide the official remarks at the launch.

“In Samoa, UNDP supports projects along the Vaisigano River which help to protect communities and settlements from flooding in Apia, trained farmers for sustainable land management, use of bio mass for energy, climate-proofed infrastructure such as sea walls and river walls, and improved access to clean drinking water. This has made significant impact on the lives of people here. In addition, youth employment, leadership development of women and gender equality are also key focus areas of our work.”

The images depicted on the banners represent strong partnerships with many stakeholders, particularly the Government of Samoa, through the Ministry of Natural Resources and Environment, which UNDP partnered with to produce the SDGs banners.

“It is our hope that by making the SDGs more visible by way of these banners, they will continue to be at the forefront of people’s minds and conscience. We hope this will remind everyone of the importance of collectively working towards achieving these Goals with a sense of urgency,” said Ms Cliff.

The timing of the launch of the SDGs banners is held to coincide with the onset of the Pacific Games in Apia, the region’s biggest sporting event starting next week. Sports bring people and communities together and provides a platform for interaction and their engagement for a healthy lifestyle and wellbeing which will directly contribute towards achieving the SDGs.

To reflect this relationship, Pacific Games representatives from the sports of badminton, tennis, Manu Sina 7s women’s rugby and netball were invited to cut the ribbons under each SDG post to officially launch the banners.