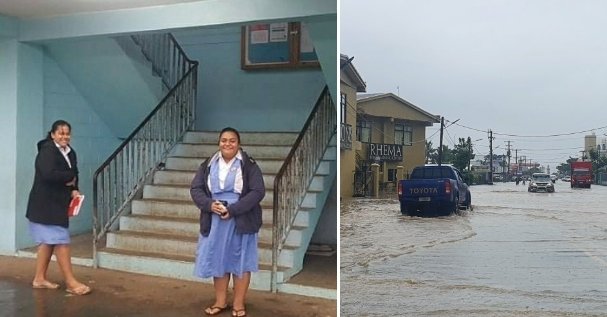 The Seventh Day Adventist School at Lalovaea was forced to cancel its seniors’ end of year prize giving due to heavy rainfall across Samoa this morning.

The notice was published at around 10am this morning, when most of Apia and roads accessing the capital were under severe flooding and unsafe for commuters.

“Talofa everyone, due to the bad weather causing flooding all around the island, we regret to inform everyone that the prize-giving for years 12 and 13 that was scheduled for the 18th of December has now been postponed to early January. We will update you all on the exact date in the near future”.

The prizegiving has been rescheduled for early January… “Thank you all for your patience and please stay safe over the festive period.”

Parents who braved the rain and flooding this morning had already arrived at the school when the announcement was made.

Mataina Naotala and Imelda Vai had traveled from Fasitoouta to attend their prize giving and were already at the school when the announcement was made.

Severe flooding from heavy rainfall left much of Apia under water this morning.

The high school ball for  Form 6 students of Robert Louis Stevenson School, scheduled to be held at Taumeasina Island Resort on Friday night was also cancelled.

One LDS Bishop confirmed that two weddings had been scheduled for Friday, also postponed due to heavy rain and flooding.