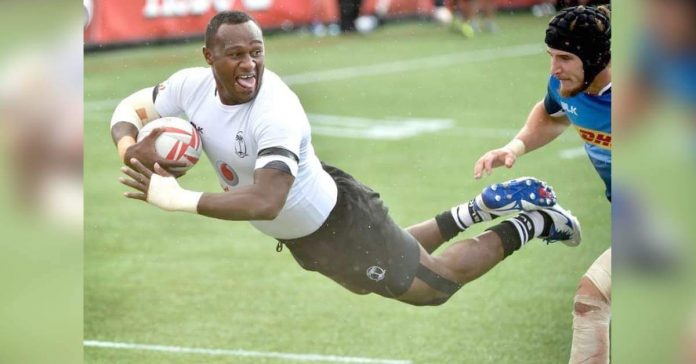 13 February 2019, Apia Samoa. The Samoa College Old Pupils Association AST SCOPA rugby club have revealed their secret weapon in the build up to the 31st Vailima Marist International Sevens Tournament due to kick off this Friday at the ACP Stadium in Lotopa.

While some of the more established clubs in Samoa are bringing in 1 or 2 players from overseas to strengthen the mix of their teams, SCOPA has brought in 3 Fijian players.

Joeli Lutumailagi and Pio Tuwai have both played for the Fiji National 7s in the HSBC Sevens World Series while the 3rd player Nacanieli Batina played for Fiji during the Silicon Valley 7s in San Jose.

Known as the King of Sevens Offloads, Pio Tuwai is now contracted with an English club and says he will have to be back on a flight on Monday.

He said, “We are happy to be here and help out with SCOPA’s preparations for the Marist 7s. I’m due back in England, and will leave on Monday from here.”

Joeli Lutumailangi who last played for Fiji National 7s in 2017 says this is his first time in Samoa.

Lilomaiava Filia Iosefa said that SCOPA are grateful to the Fijian brothers for making time to be here.

“On behalf of our Club President I’d like to thank our Bula brothers for coming. We look forward to an exciting tournament this weekend.”

Lilomaiava also acknowledged AST Industries for their sponsorship of SCOPA rugby as well as overseas-based old pupils of Samoa College who had arranged and funded the airfares for the Fijian recruits.

“One of our SCOPA members overseas, Lofi Fuatogi has arranged for this.”

Speaking to Samoa Global News Las Vegas based Lofi Fuatogi said that the addition of the Fijian players is to improve SCOPA’s chances of securing the championship cup.

“Only Mark Tanuvasa, Filisoa Faaiu and Ola Pili that played all 3yrs of Marist 7s finals,” he added.

“This year we are really hoping to secure the championship”.