High Chief Faavae Siaki Crichton of Fagasa Sataua Savaii says Members of Parliament should be speaking to their constituents about the three Amendment Bills now before a Special Parliamentary Select Committee for public consultations.

Their mission was three-fold. To find copies of the Amendment Bills, seek to understand more about the proposed changes, and be able to identify any impacts imposed on their village if the Bills are passed into Law.

Outside the offices of the Legislative Assembly, the three matai from the Big Islands Vaisigano II Electorial Constituency said their Faipule has not yet made the effort to speak to them about the Bills which they have seen widely debated on national television.

Faavae said village matai have seen and heard members of the Samoa Law Society on TV discuss the impacts of the Bills.

“This has raised concerns amongst villagers. The decision was then made for us to travel to Apia from our village of Fagasa Sataua, in search of answers”.

Faavae told the media that they do not accept the idea of MPs deciding for the Constituency on these matters, because they are deeply sensitive issues pertaining to matai tiles, and lands.

Faavae calls for Members of Parliament to consult with each village and be guided by the decision of Alii and Faipule in their respective districts.

He says there is an urgent need for programs to be brought to Savaii to help them understand the legislative changes being proposed. He says their Member of Parliament needs to not only consult with them, but explain the Amendments to them.

The Constitutional Amendment Bill 2020, the Lands and Titles Bill 2020 and the Judicature Bill 2020, have passed their first and second reading in Parliament, and a Special Parliamentary Select Committee have been hearing public submissions over the past two weeks.

The Committee plans to travel to Savaii in July as part of the 90-day program to gather public opinion.

Faavae, however, says there is no point in coming face to face with the Parliamentary Committee, when they do not yet understand anything about the Bills.

He calls for urgent action to bring awareness programs to Savaii before the Select Committee arrive. That way, he says, they will be able to respond and put forward meaningful submissions.

Faavae said that as an example, they object to the notion that villages cannot conduct title bestowal ceremonies if the Government Village Representative or Sui o le Nuu, was not present. They had heard this explained on TV and they object to it.

“That is why it is important for the Sui Faipule to come and explain to us”, he said.

The question of MPs helping Consituents to understand the amendment bills has been asked and somewhat answered by Member of Parliament for Urban West Faumuina Leatinuu Wayne Fong in a public post on social media yesterday.

Faumuina Leatinuu claims MPs are none the wiser on the proposed Amendments, because they were given just one day to go through the Pre-Sitting summary – which was the day before the three Bills were presented for first and second readings. 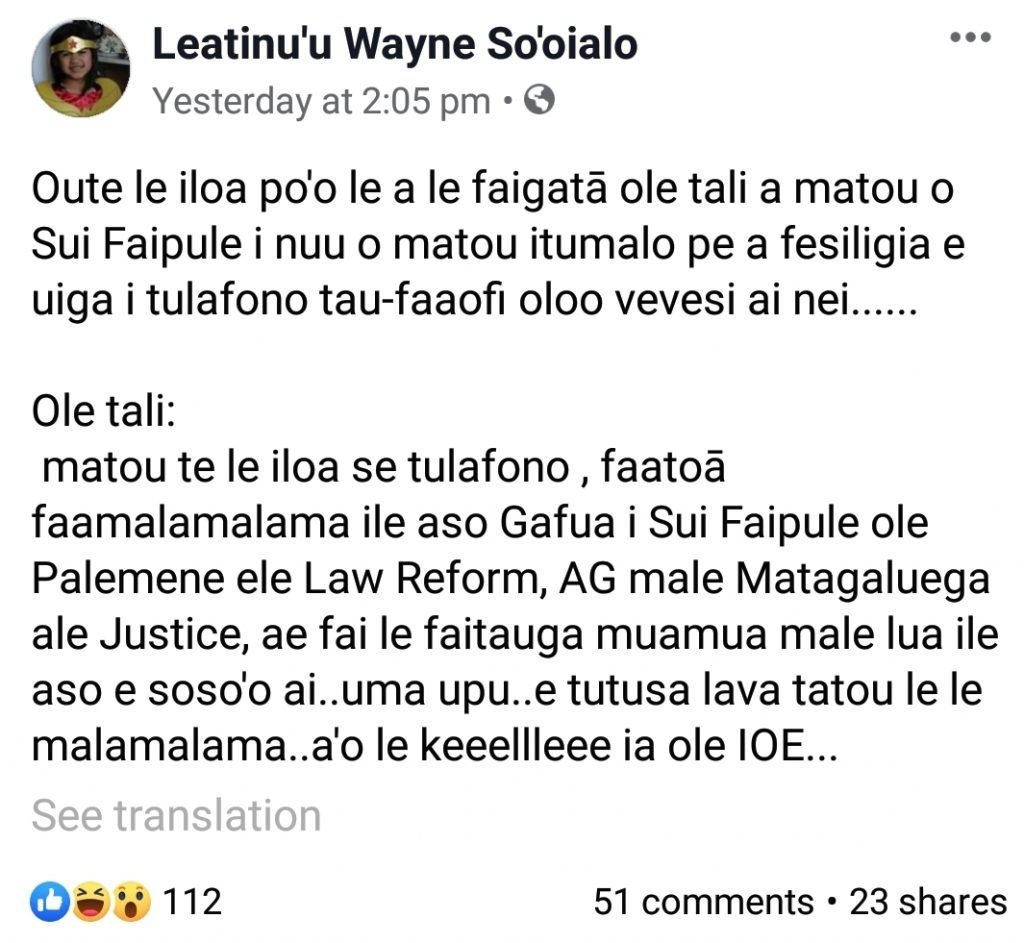 The Member of Parliament concludes that they as representatives of the House are just as much in the dark as everyone else, and yet, the loud echo of, “IOE” is always heard throughout Parliament at voting time.