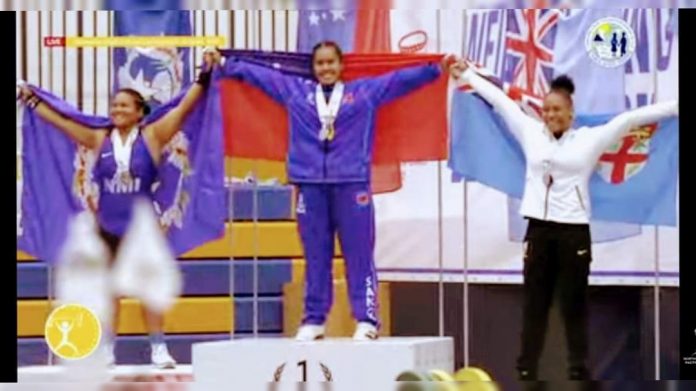 Samoa’s young lifters are raining in medals and breaking records at the Pacific Mini Games 2022.

Faustina Opeloge has taken out 3 gold medals at the Pacific Mini Games in the women’s 81kg division.

Faustina is the daughter of Samoa’s Commonwealth Games gold medalist champion lifter, Tupuola Niusila Opeloge. The youngster has her own training gym in an open fale next to their family home and has only been lifting for 6 months.

President of the Samoa Weightlifting Federation and National Coach Tuaopepe Asiata Jerry Wallwork says Faustina is one of Samoa’s up and coming lifters, and at only 17 years old, the future is bright for her.

“Avatu is daughter to Ele Opeloge and has also been lifting for just 6 months,” said Tuaopepe.

And finally from Wednesday’s results, Samoa’s Tovio Ah Chong, at just 15 years old, came in fourth for the 140kg division but the youngster’s lift has set a new Oceania Youth record for the 140kg Clean & Jerk.

“Look out for this young man in 12 months time,” says the SWF President.

The Samoa Weightlifting Federation opted for a young team to the Pacific Mini Games 2022 in Saipan, led by Tupuola Niusila Opeloge as coach.

“We were hesitant to take a team to the Mini Games simply because of Covid, and also our senior team not being able to attend on account of their Commonwealth Games preparations,” said Tuaopepe.

“The young team or B Team representing Samoa at the moment consists of very young juniors, with very little experience,” said the SWF President and National Coach.

“Most of them are competing for the first time on the international scene”.

The Samoa Weightlifting Federation have also used the opportunity to compete at the Mini Games to give developing  coaches exposure and experience.

“The Pacific Mini Games team is being coached by our assistant coaches, giving them the chance to gain experience, and so far they’re doing a great job,” said Tuaopepe.

The gold-medal winning coach says there will be more lifting today, “and we are hoping for some great results”.