26 September 2019 Tokyo RWC 2019.  Samoa’s Rey Lee-Lo has received a three-match ban for a high tackle at the Rugby World Cup, ruling him out of the rest of the pool games.

The Cardiff Blues centre was yellow-carded in the first half of Samoa’s Pool A win over Russia on Tuesday for his tackle on fullback and captain of the Russian side, Vasily Artemyev.

Samoa front rower Motu Matu’u was also given 10 minutes for a separate high tackle on the Russian captain who stooped low as he was tackled in both cases.

In both incidents, French referee Romain Poite decided against giving a red card saying there was a mitigating factor in the fact that the player stooped as he was tackled. 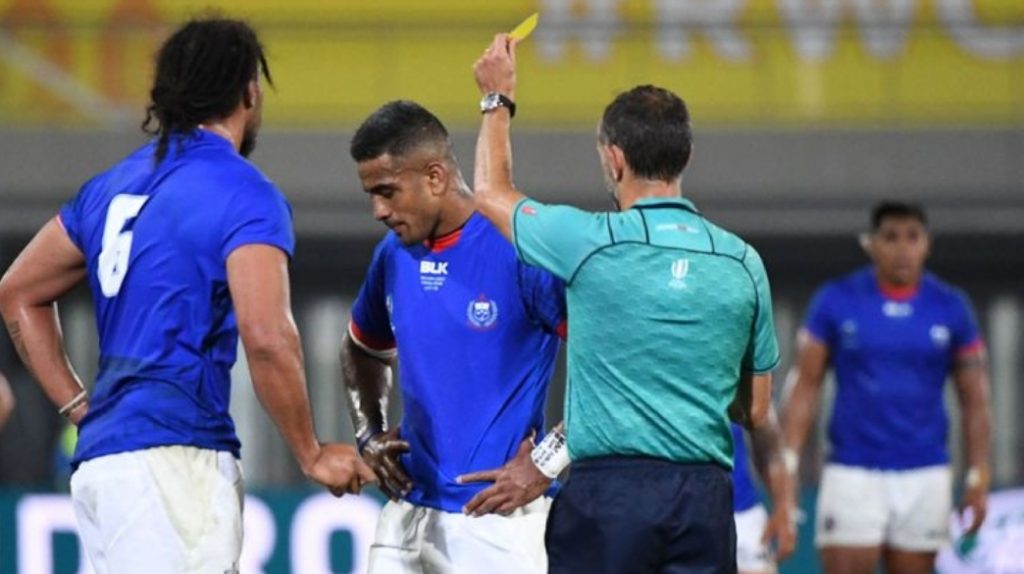 However a three-member Judiciary Committee (JC) found that it was a red-card offence, handing Lee-Lo a three-game suspension that only expires after Manu Samoa’s final pool game on Oct 12th 2019. The JC was chaired by former International and Singapore lawyer Wang Shao Ing, with John Langford of Australia and Olly Kohn of Wales.

“The committee deemed that the incident was an act of foul play and warranted a red card in line with the high tackle sanction framework,” a statement from WR said.

Kirill Gotovtsev tackled and pulled Amosa down around the neck, causing him to fall awkwardly on his right knee which now needs surgery bringing an early end to the Rugby World Cup for Samoa’s power forward.

“Campo” has tweeted about the inconsistency of World Rugby decisions, referring to the tackle on Amosa as an example. The 1991 RWC champion winger who played 101 tests for the Wallabies says the logic of citings and red cards make no sense to him.

Samoa’s Rey Lee-Lo becomes the second player to receive a three match ban at the Rugby World Cup this week.

Australian winger Reece Hodge was handed the same sanction for his dangerous high tackle on Fiji’s Peceli Yato, an offence which was unpunished during the game.

The full details of that hearing have since been released, where Hodge claimed he had no knowledge of World Rugby’s new framework for dealing with high tackles.

Prior to the Rey Lee Lo citing, former referee Rob Debney made the dramatic observation reported by Stuff.Co that Rey’s tackle “could have killed the Russian”. Former Otago and All Black fly half Tony Brown now Assistant Coach to Japan also joined the chorus saying it should have been a red card.

You can access full WR Hearing Reports on  https://www.world.rugby/documents/judicial-decisions?lang=en