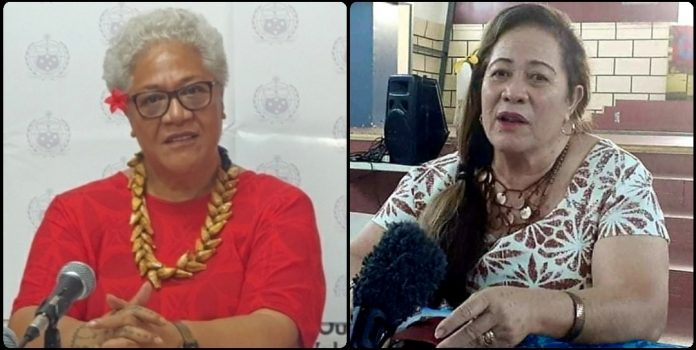 Sunday 31 October 2021 Apia Samoa. Samoa’s organised union of civil servants, the Public Service Association (PSA) have threatened industrial action if they are not given a face to face meeting with the Prime Minister.

In a press statement signed by the PSA President Lealaisalanoa Karamellie Tuala and Council Members of the workers union, they state their disappointment that they have not received a response to two letters “hand delivered to the office of Prime Minister Hon Fiame Naomi Mataafa” dated 27 August and 8 September 2021.

“Be professional, meet with us”.

In the press statement published below, the President and PSA Council say they will not be ignored, and if a meeting is not scheduled to discuss the important issues they have raised, then a public service strike is inevitable.

“We want a meeting with the Hon. Prime Minister to dialogue on these issues as the alternative is industrial action, which we know the government does not wish for us to engage in”.

The PSA again state the issues they are raising include “the unlawful suspension, forced resignations and termination” of the Attorney General, Clerk of the House and CEOs of MWCSD  (Ministry of Women, Community and Social Development) and MOF (Ministry of Finance).

According to PSA, the Government have breached Recruitment and Selection policies with the direct appointments of the AG and  Clerk of the House.

The workers union says the appointment of “policy advisers” for Ministers is “perpetuating distrust of public servants, directly affecting morality”.

The PSA also claims drivers have been hired at the annual rate of $34,000 “which is more than the starting rate of a university graduate”.

The workers union alleges the Government as an employer has breached Article 13 of the Constitution – freedom of speech, expression and assembly through, “veiled threats and intimidation of public servants because they publicly hold a different political view and affiliation from your political party..”

The PSA then go on to say they have never been ignored by the previous government, and then again issue a threat by referring to the union’s 1981 three-month strike that was critical to the rise of the Human Rights Protection Party and its victory in the 1982 general election.

“History taught us that the last time a Government and a Prime Minister ignored PSA and was being dismissed, industrial action resulted, and a new government came into power. A history lesson that this government must take heed of.”

When asked by local media at a press conference three weeks ago, Prime Minister Fiame said the best way to avoid political interference is to utilise the proper process through the Public Service Commission to assess and consider any grievances and concerns raised.

The letters had been announced by opposition leader Hon Tuilaepa Sailele Malielegaoi in a press release earlier that week where he said the letter from Public Service International “was not a good look for Samoa in the international scene”.

At the time, Prime Minister Fiame Naomi Mataafa acknowledged the issue is an important one, and said there would be a time set aside for discussions, but noted that there are ongoing discussions being held between government and its employees at the workplace.

“There will be a time to meet,” said Fiame, “but discussions that are even more important, are the conversations on the job, in the workplace between employers and employees on a daily basis”.

“I would like to make it quite clear.. that is not the intent of this new administration. It is not a policy, and we have continuously said on other occasions that as an incoming administration, we hope to work with our public servants.. they are the implementers of government policies, and we will continue to do so”, the Prime Minister assured at the time.

Chair of Samoa’s Public Service Commission Lauano Vaosa Epa advised against a Commission or Inquiry requested by PSA and said grievance cases had to be assessed on a case by case basis on its own merits.

The PSA Press Release issued Saturday 30 October is published in verbatim below. 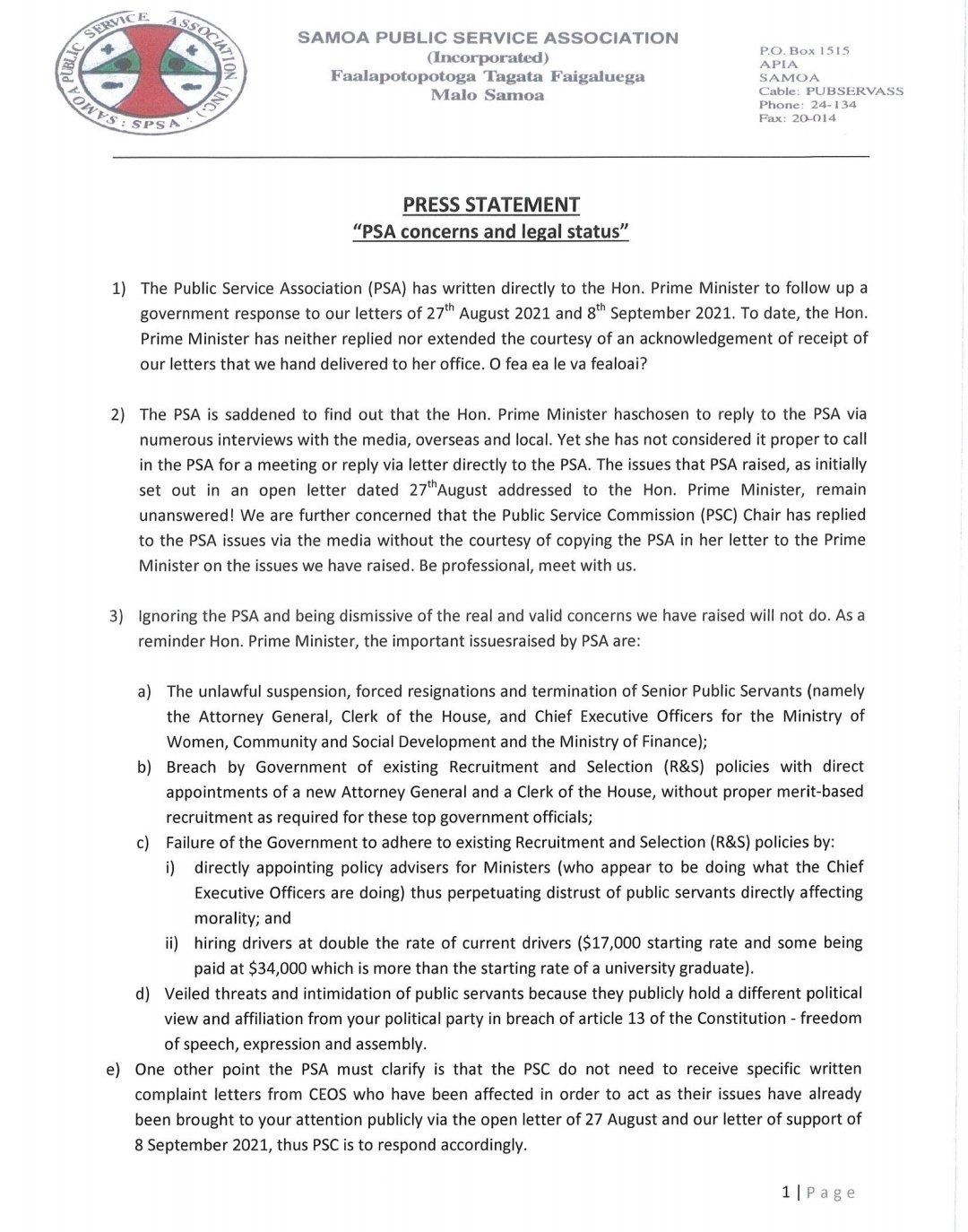 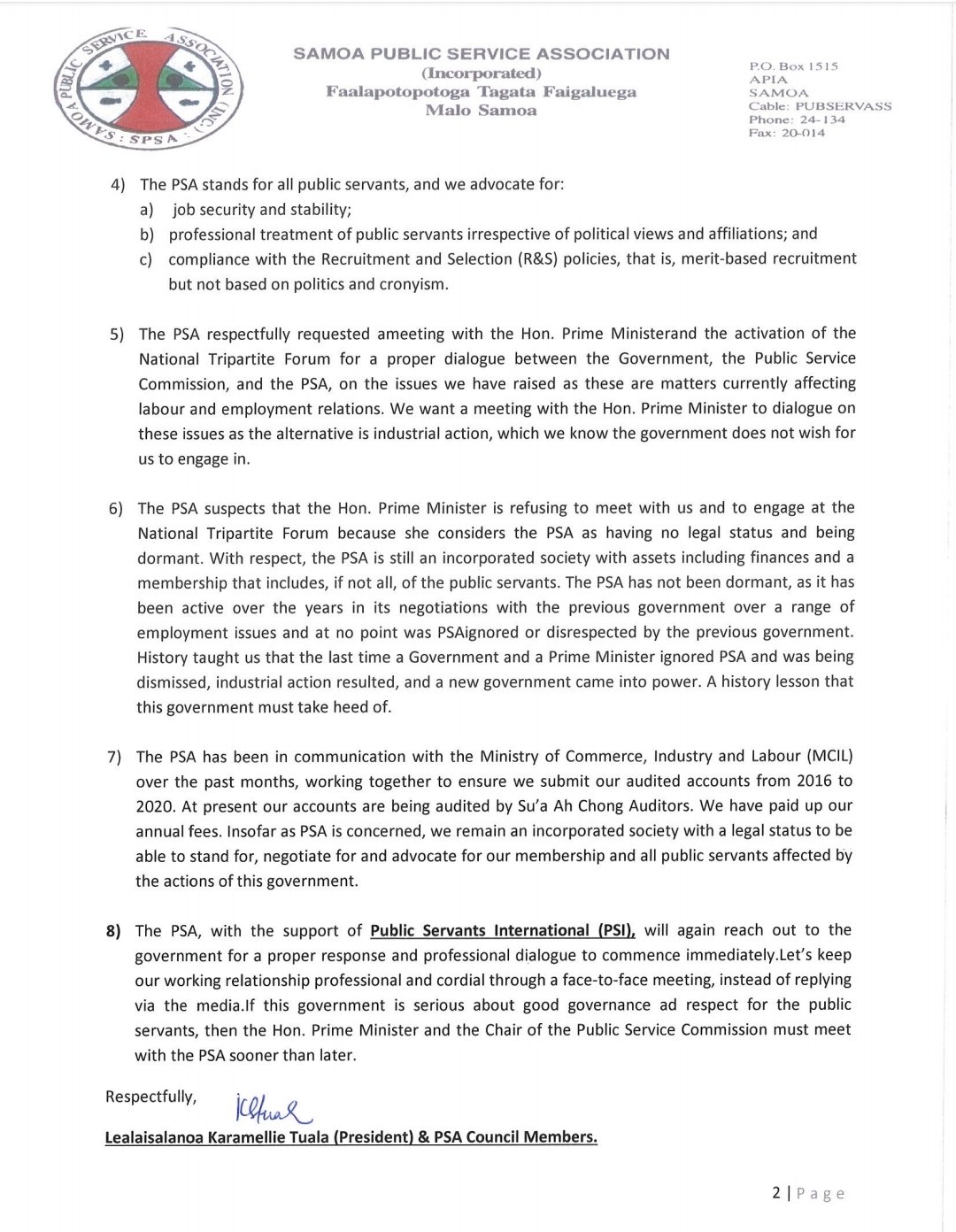