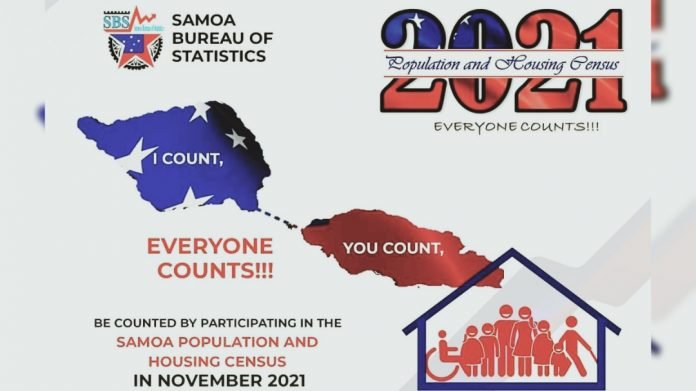 28 April 2022 Apia Samoa. Samoa’s population has finally exceeded the 200,000 mark according to preliminary results of its latest census. A report issued today by the Minister for the Samoa Bureau of Statistics Hon Leota Laki Lamositele gives a preliminary count of the total population residing in Samoa, from data collected and compiled during the census enumeration period from the 18th October to the 6th November 2021.
“The preliminary count indicates a total population of 200,010 persons in which 51 percent are males and 49 percent are females,” the report states.. “This compares with a total population count of 195,979 persons at the last census conducted in November 2016 with no changes in the gender composition”.
This Census is held every 5 years and the recent result indicates a net increase in Samoa’s population of 4,031 over the five year period, or just 806 people per year. That is a annual growth rate of just 0.4% per year.
There are over 200,000 people with Samoan heritage living in USA according to a US 2019 population count, while New Zealands latest census records over 182,000 Samoans. For Australia the last count showed over 75,500 people declaring Samoan ethnicity.  The Samoa Bureau of Statistics says more comprehensive data will be available once the final count is complete.
Demographics will also take into account the 343 villages within the 51 Political Districts – 20 in Savaii and 31 in Upolu including Manono and Apolima.
“This is the first census that the Computer Assisted Personal Interview (CAPI) method was used to collect the information compared to the Paper And Pencil Interview (PAPI) method used in the previous census,” states the release.
“It is also the first time the population has been tabulated based on the new distribution of political districts and villages used in the national election by the Office of the Electoral Commission in April 2021..
The results of this latest census will help inform the public of the changes that are taking place in the population count of Samoa and the impact of these changes on the social and economic development within villages and communities.
The Minsiter acknowledged the support and assistance by the UNFPA.  He also acknowledged the strong cooperation by all household respondents in providing the information requested.
“Lastly, the dedicated and committed work by the 220 temporary workers involved in the collection o f census data deserves special mention and recognition”.
Afioga Leota Laki Lamositele
Minister for Samoa Bureau of Statistics.