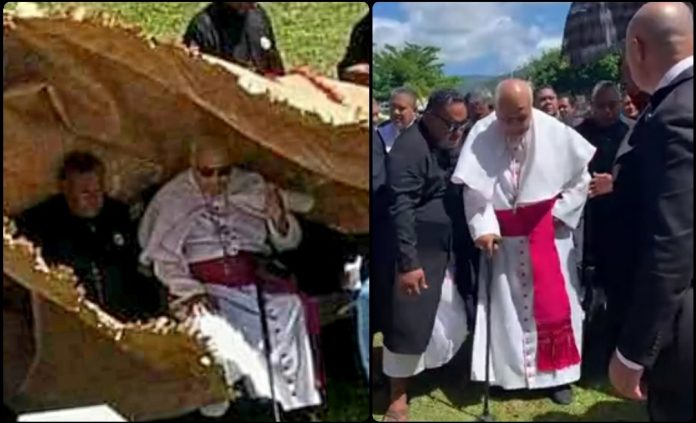 Wednesday 15 September 2021. Samoa’s political impasse reached new heights on Wednesday afternoon when the Archbishop of the Catholic Church, Alapati Lui Mataeliga performed a traditional ifoga, a formal offering of an apology infront of the Government Building in Apia.

The Samoan ifoga is reserved for sins and trespasses considered unforgivable between two conflicting parties, families or villages. According to members of the Archdiocese who accompanied the Archbishop, the purpose was to ask the Government of Samoa for peace, and to bring an end to the ongoing political crisis. 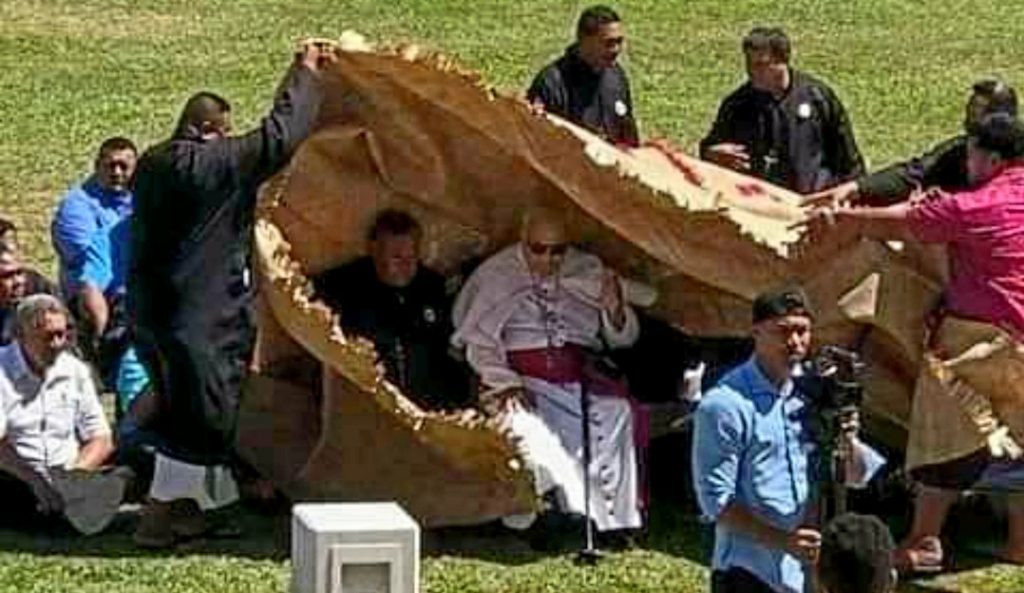 Responding to questions from Samoa Global News, Chairman of the Faatuatua i Le Atua Samoa ua Tasi (FAST) party, Laaulialemalietoa Leuatea Polataivao Schmidt said he received a call that the Archbishop wished to come and meet with Cabinet. He said they had walked down to greet him and escort him up, but was shocked to see what was happening on the malae outside Parliament.

“We walked down to bring the Archbishop up to the Cabinet rooms, when we saw them placing an ietoga on him.. We immediately walked up to remove the ietoga as it is highly inappropriate for the leader of the Church to be in this situation, especially as there is no grievance or problem between the Government and the Archbishop or the Church,” he said.

Laauli added they did not accept the ietoga traditionally taken by the side being apologized to, because there was no basis for a ifoga. 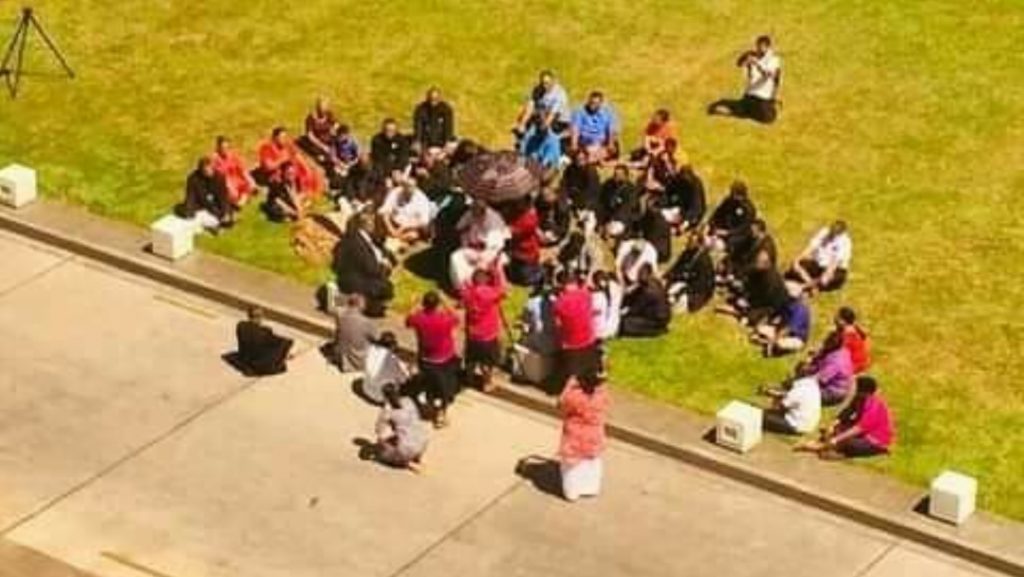 “We removed the ietoga and noticed he was praying the rosary, so we sat with him until he was done,” said Laaulialemalietoa.

The Archbishop and the contingency of clergymen were then invited into the Government building for further talks, and to await the Prime Minister and Speaker who were at that exact time, seeking an audience with the Head of State at his Vailele residence. 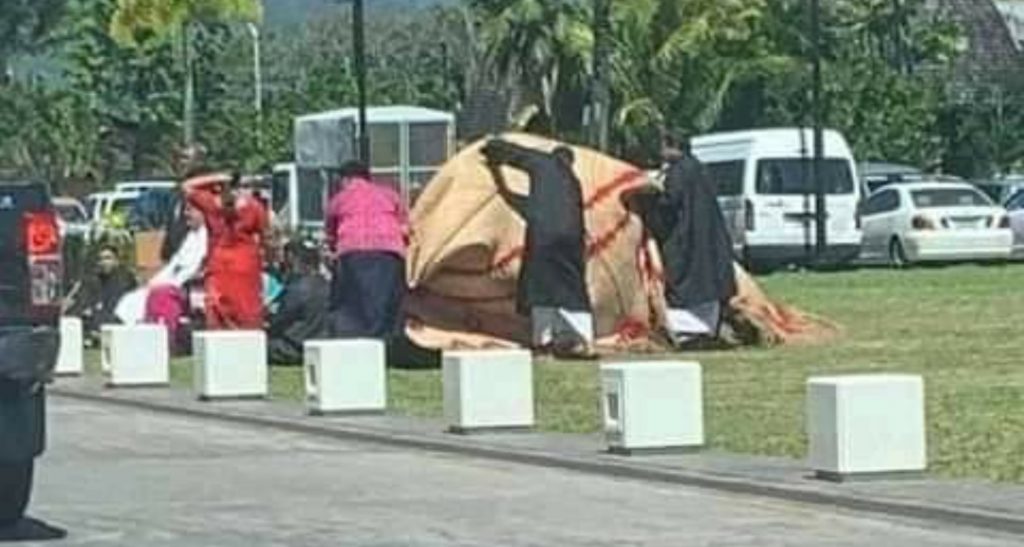 Samoa’s post election political impasse was thought to have been brought to an end when the Court of Appeal declared Samoa has a government confirming  newly established FAST political party as having the majority of seats following the 9th of April general election. The Court also declared legal, a tent swearing-in held by FAST for its 26 elected members when Parliament House was locked on the 24th of May 2021.

However, the HRPP elected members who did not attend Parliament on the 45th day mandated by the Samoa Constitution for Parliament to convene following a general election – emerged from the five-month long political crisis unsworn-in. HRPP’s position, rejected by the Court of Appeal, was that the 6th woman ought to attend the first convening of Parliament after an election. The 6th woman seat would have taken HRPP from 25 to an equalizing 26 with FAST.

The Constitution of Samoa requires the Head of State to call for a new Parliament to convene within 45 days of a general election, however, it is silent to what happens if elected members are not sworn-in within that time frame.

More recent negotiations between HRPP members and the Speaker of the House in relation to the status of the party’s elected members ended with the Speaker sending a letter issued on Monday this week, stating that HRPP members would not be sworn-in because they have not accepted the FAST government and should not, therefore, attend Parliament this week.

For the past two days as Samoa’s Parliament convenes for the first time inside the Maota Fono since the 9 April general election, Tuilaepa and elected HRPP members have tried unsuccessfully to enter Parliament grounds. The Speaker had also issued a notice prohibiting the general public from entering Parliament grounds with barricades were put up to block anyone from entering the Malae o Tiafau, which remain there today.

This morning (Wednesday) HRPP were camped outside Parliament House asking for an audience with the Speaker. This triggered a series of events that caused the Samoa Police to move in with the intention of arresting the group for trespassing. Police officers issued a warning for Tuilaepa and HRPP elected members to leave, or face arrest.

A faifeau who was present, Reverend Bismark Tamati, was seen getting down on his knees to plead for peace, in an attempt to avoid the intended arrests.

Upon seeing all of this transpire outside the Maota Fono in Mulinuu, both the Head of State and Council of Deputy soon arrived into Parliament grounds, to intervene in what has continued to be an escalating conflict between the two rival political parties; FAST and HRPP. 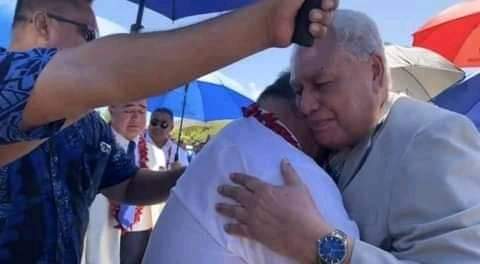 It was an emotional scene as Samoa’s longest serving Prime Minister (1998 to 2021) was seen breaking down in tears as he was embraced by Samoa’s Deputy Head of State Le Mamea Ropati Mualia, and Head of State Tuimalealiifano Vaaletoa Sualauvi II.

The National Council of Churches (NCC) also became involved this afternoon, by turning up to Parliament grounds seeking to meet with both political parties. 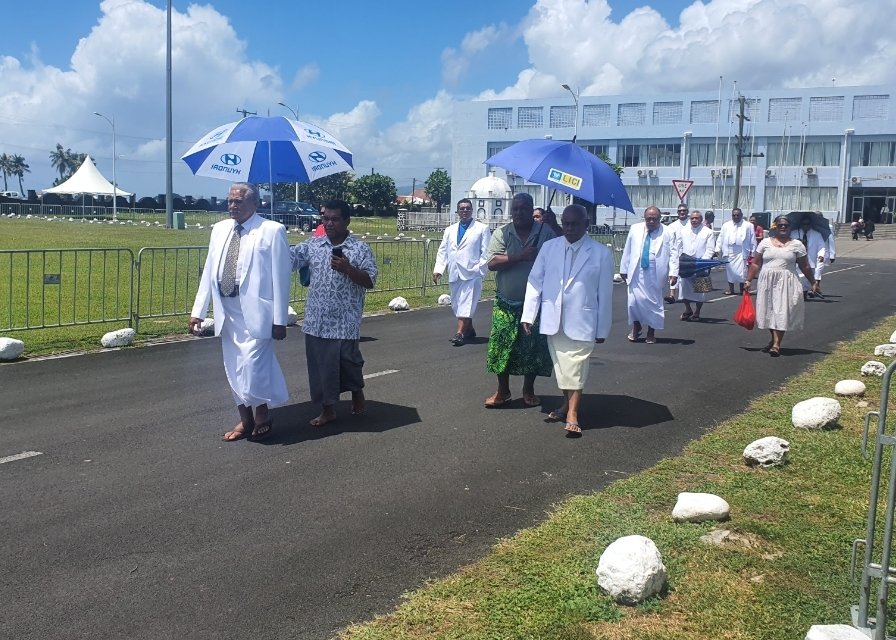 Vice President of NCC Reverend Aisoli Iuli told the media that they were not able to meet with Prime Minister Fiame Naomi Mataafa and members of FAST. They were able to sit down and meet with Tuilaepa and members of HRPP.

The NCC advised HRPP to stay calm, be forgiving and remain in faith to the Lord for a peaceful solution for Samoa. 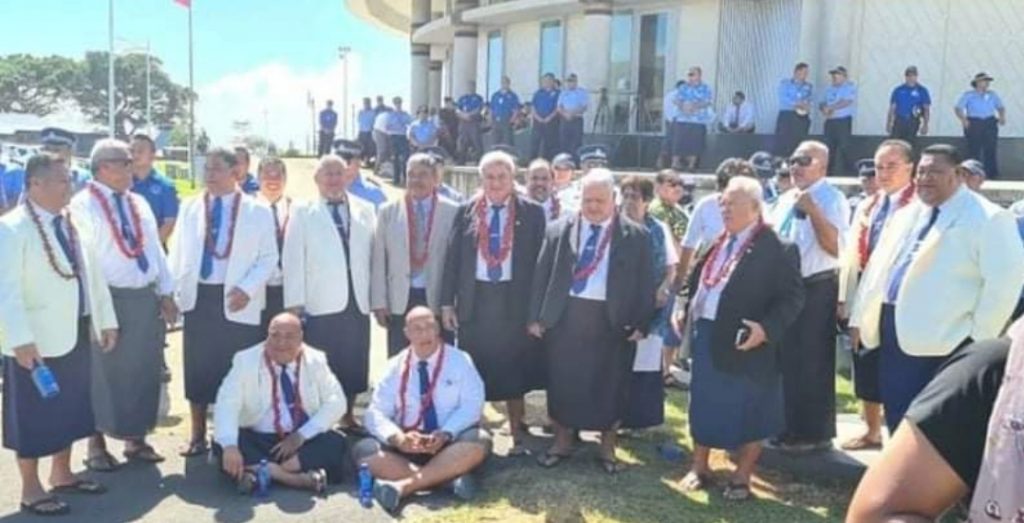