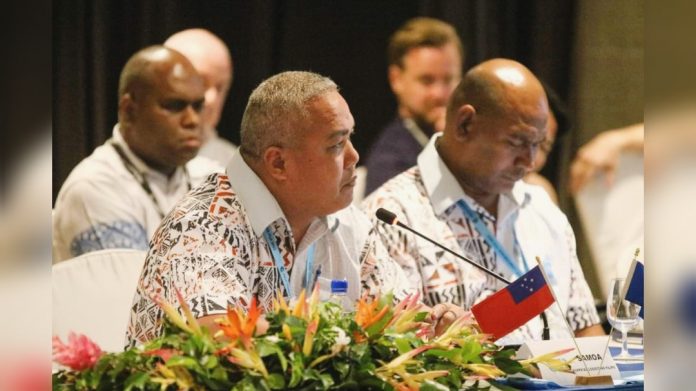 Hosted by the Fiji Police Force, this year’s PICP conference theme is “Workforce Well-being and Resilience”.

It is the first in-person Conference since 2019 and the Pacific Police Chiefs and Commissioners will be celebrating several milestones such as the 50th Anniversary of the PICP postponed from 2020.

“The annual conference is a chance for Chiefs of Police from around the region to come together to discuss common issues, share ideas and build areas of cooperation,” said Samoa’s Police Commissioner.

The first day of the 2022 PICP Conference saw heads of regional Police Forces talk about their organisation’s strategies in addressing workforce resilience and well-being.

The key note address was delivered by Dr Apisalome Talemaitoga who spoke on “Workforce Resilience & Wellbeing for a Safer, Healthier Blue Pacific”. He stressed the importance of finding the right balance in life and work.

A presentation from the PICP Women’s Advisory Network was delivered by Senior Superintendent of Police (SSP) Bereta Naisua on the outcomes of their two day conference held earlier in the week.

“We have come together today to discuss the most valuable of all the resources available to the Chiefs of Police, our people”.

Mr Oberoi said the wellbeing and success of INTERPOL is dependent on the help provided to individual members.

“And we recognize the diverse threats that affect each INTERPOL region uniquely, there is no region where we can be complacent and we know that everyone has a role to play”.