Samoa’s longest serving Prime Minister and elected members of the Human Rights Protection Party were blocked on the main road by police acting on a public notice issued by the Speaker of the House prohibiting any member of the public from entering the Malae o Tiafau, and any part of Parliament grounds during the first parliamentary sitting since the country went to general elections five months ago.

Elected members of HRPP emerged unsworn-in from the rollercoaster of events and multiple court battles that will go down in history as Samoa’s 2021 post election political impasse. However, seven weeks after the Faatuatua i Le Atua Samoa ua Tasi party takes over as the new government, the status of HRPP’s elected members remains uncertain and that has now led to their inability to enter the House of Parliament. 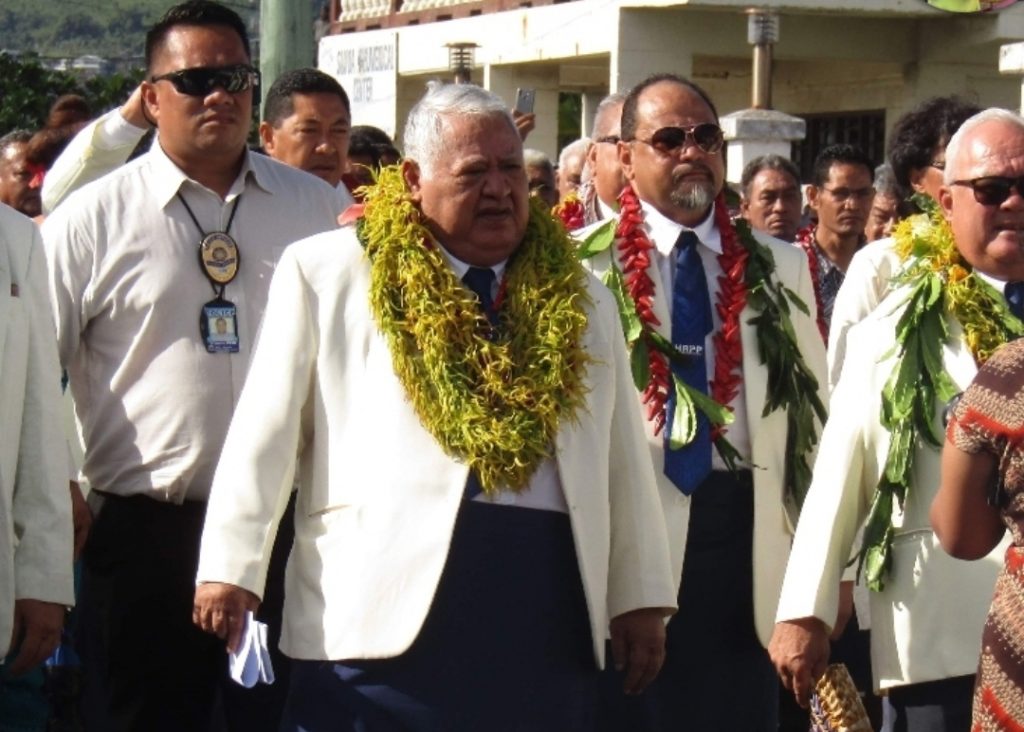 On Tuesday morning, as FAST MPs and Heads of Government Ministries drove up to Parliament House, the elected HRPP members from 25 out of 51 territorial constituencies in Samoa, were forced to turned back. With 7 by-elections confirmed, at least 18 of those MPs still represent constituencies across Samoa.

Their attempt to walk up to Parliament House in peaceful protest of being denied entry, was blocked by police, lined up behind barricades set up along the main road.

It was an atmosphere of mixed emotions when the leader of HRPP and former Prime Minister of Samoa who served as PM for more than 20 years, requested police officers to allow them to walk to Samoa’s Maota Fono (Parliament House). 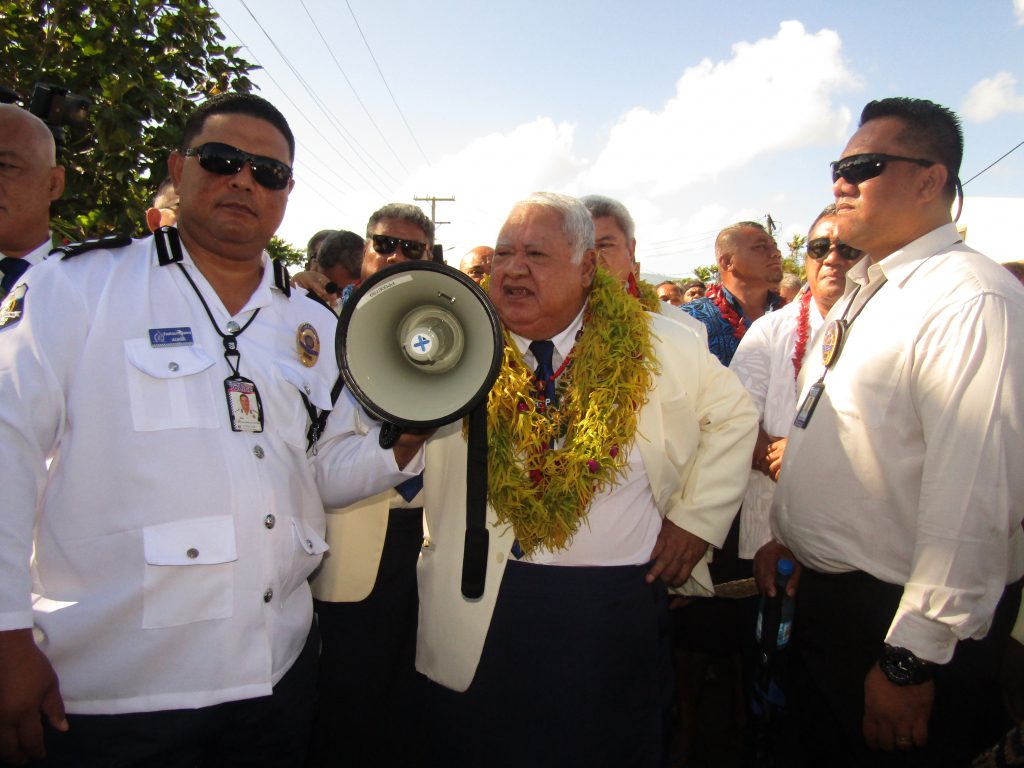 Tuilaepa Dr Sailele Malielegaoi told Police that never before had citizens of Samoa been blocked or prohibited from conducting peaceful protests, and never before had they been stopped along public raods.

Tuilaepa said this was a direct infringement on their rights as elected MPs, to sit in Parliament as chosen representatives of their districts, also blocking them from debating the Appropriation Bill for government expenditure which was a priority in today’s Parliamentary proceedings. 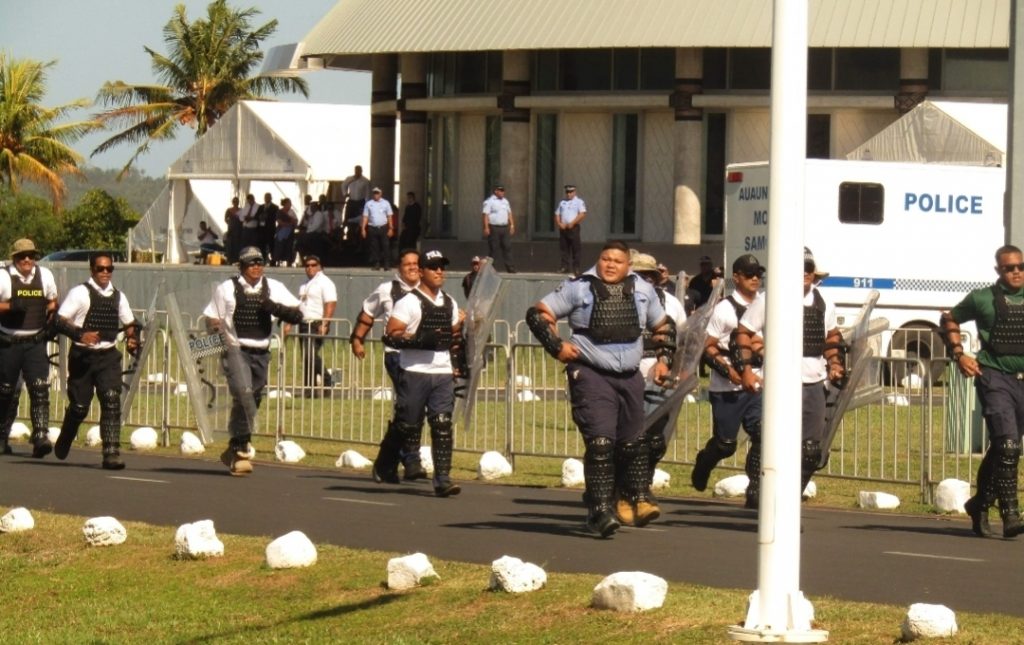 “This is a strategy for them (FAST) to enter Parliament and pass the budget without proper debate, without a voice from us and the people we represent,” said Tuilaepa who also questioned the quorum being met.

“There is no quorum, so all of this is illegal and cannot be passed,” said Tuilaepa.

“It is clear, they want to stop us from attending Parliament so that they can pass everything quickly, without us,” Tuilaepa said.

Tuilaepa said he has often been blamed by FAST for abuse of power, (pulepule tutu) however, according to the HRPP leader, abuse of power is now evident in FAST actions towards them.

“Why would they order us to be blocked like this? This is a public road. Never before have protest marches in Samoa been stopped, and citizens not allowed to access public roads,” said Tuilaepa.

The HRPP leader went on to mention historical protests against the government over the years, that were allowed by the HRPP government to proceed, without hindering the rights of citizens to assemble and walk on public roads.

Tuilaepa then urged the HRPP elected MP’s to stay calm and accept the fact that they have been banned from entering Parliament.

“But today we come in peace, we will rest here under this ulu tree and tapuai today’s Parliament session”, said Tuilaepa as he led his group of elected MPs to rest under the shade of nearby trees along the side of the road.

Some HRPP supporters expressed concerns about the ban against their elected Members of Parliament. Fata Loketi Fa’alili of Afega said, the duty of Tuisamau (from their village) is to keep the peace and make sure their is no tension between the HRPP supporters and the Samoa Police Service.

“It’s days like these that we have to come along, and conduct our traditional roles. We have advised the respected leader of HRPP to stay calm and be patient, as a plan going forward is decided and discussed,” Fata said.

Tumaealu Petelo of Faleula said that they give their one hundred percent support to their MP, the former Minister of Education and a former Manu Samoa centre, Loau Keneti Sio and the HRPP party.

“HRPP have done so much for Samoa since they were in power for so many years, sadly today it seems that Samoa is no longer a democratic nation founded on God,” Tumaealu said.

“They (FAST government) should keep the Samoa tradition and culture of “va fealoa’i” and “respect” to come up with a solution to this ongoing political crisis,” he added.

The XVII Parliament of Samoa was convened on Tuesday 14 September 2021, with only 25 Members of Parliament attending, and the Speaker of the House.

The 26 FAST MPs were sworn in on the 24 May 2021, the 45th day after general elections however, 25 HRPP MPs elected at the general elections refused to attend. At least 7 HRPP members have since lost their seats or have resigned since the April 9th general election, however Tuilaepa says they still all need to enter Parliament where their resignations or removals by court order can be formalised.

The Government Budget Address was tabled and discussed amongst the 25 FAST Members of Parliament present, after being presented by Samoa’s first female Minister of Finance, Hon Mulipola Anarosa Molioo.