The Congregational Christian Church of Tanoalei’a at Vaivase-Uta was packed on Saturday morning with dignitaries, members of the clergy, community leaders, staff of the Legislative Assembly, family and friends to honor and farewell the Reverand who was also Head of Samoa’s Legislative Assembly Translation Division.

Reverend To’omata Kereta Faatonu was described as a humble person, who could play many roles, with passion and commitment for his work and his family.

The Funeral Service was led by Reverend Elder Enefatu Lesa (Faifeau Toeaina) while Caretaker Prime Minister Susuga Tuilaepa Sailele Malielegaoi and outgoing Speaker Afioga Leaupepe Taimaaiono Toleafoa Faafisi were both in attendance to honor a man whom they both testified, has played a crucial role in the Legislative Assembly of Samoa for the past three parliamentary terms, or 15 years. 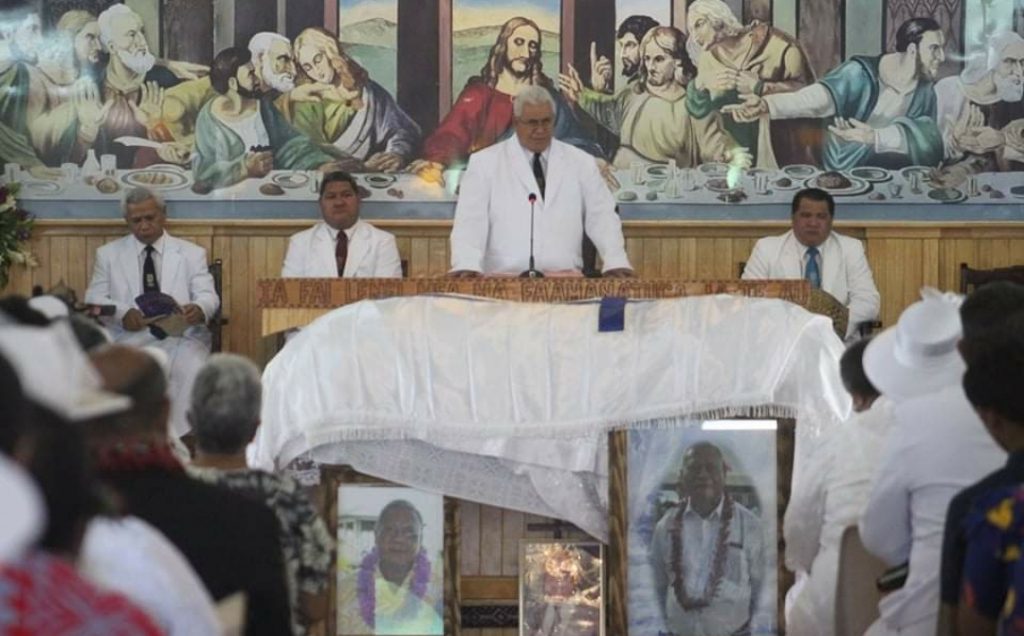 Rev Kereta is from the villages of Avao, Satoalepai and Tanoalei’a, and those in attendance were blessed and inspired to hear an account of his lifetime achievements.

He attended Avao, Satoalepai and Itumalo Fagamalo primary schools until he attained Samoa College entrance in 1966, graduating as Class of 1970. He entered Malua Theological College in 1986, and after several years working with the Public Service Commission, he was called to serve as a faifeau with the EFKS Samusu. He and his wife and children served here for 15 years.

He first worked in 1976 as an Inspector (Ofisa Asiasi) at the Public Service Commission. He moved into training and became part of the Senior Management ten years later, in the role of Advisory Training Officer for PSC.

Reverend Kereta then moved to serve as Secretary for Samoa’s Ambassador in Tutuila before he and his wife, the Late Vaaifetu Siaosi Sumeo and their 7 children, returned to serve at Samusu EFKS.

He was a member of the EFKS Finance Committee and started his work with the Legislative Assembly in 2006 while Mase Toia Alama was the Secretary of the Fono.

He has played a pivotal role for the past 15 years, working right up until he passed away just days after XXVI Parliament of Samoa dissolved last week.

The translation of Samoa’s Laws, all presented to the Legislative Assembly in the Samoan language, was a major part of his work.

The faifeau’s role extended from translation of laws to other Parliament committee documents and papers, said Toleafoa.

“He endured the long working hours sometimes late into the night, his dedication and leadership never faltered”.

His daughter Mataia Taliifaia Faatonu-Sila, the youngest of his seven children talked about the life that very little knew about her father.

Mataia shared how her father was a pioneer of gender equality in that he played both roles of father and mother.

“He was always the one that came to enrol us into school, and for White Sunday, he would take us all on the search for new clothes..”

Mataia says her father prioritised his work at the Legislative Assembly and jokingly recalls with affection, his dedication to ensure coffee was available for his colleagues.

“Our Dad played many roles… he was the coffee maker for all the ladies in the office,” Mataia joked.

“He would cart with him to work the coffee, sugar, sometimes even packets of instant oatmeal!

“He could also easily switch from office coffee maker by day, to office bartender by evening..”

She said that he was an outgoing person who loved to mingle with his friends from work. Their father will be sorely missed by many, but most especially herself and her children.

Mataia shared that the eldest amongst her siblings was laid to rest last year, and Reverend To’omata Faatonu is survived by 6 children and 28 grandchildren.