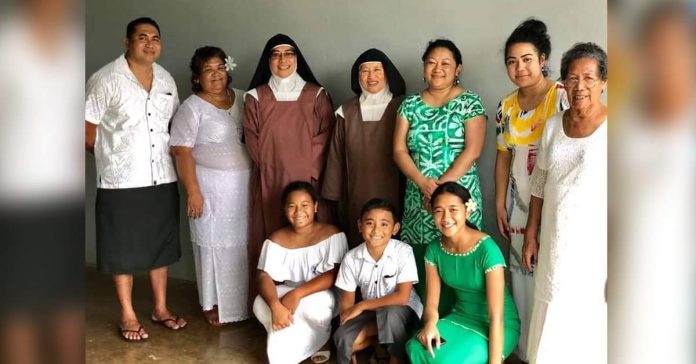 28 July 2019, Apia Samoa. Family and friends of Tali Jennie Sua came together for a special mass on Saturday morning  to give thanks and praise to God on the one year anniversary of her bilateral lung transplant.

For 35-year old Tali of Sinamoga and Vaitele, the journey has been one that has drawn her closer to God as she describes her experience as nothing short of a miracle.

Tali and her husband returned home in December last year after spending thirteen months in Chennai, India where she received the highest level of medical treatment available through the Government of Samoa overseas treatment scheme.

After nine and a half months of waiting for a lung donor Tali was able to have the bilateral lung transplant on the 27th of July 2018, and then finally released in December 2018 to come home after a successful recovery.

Tali was away from her two children Vernnia and Vashon aged 13 and 8, and her 72-year old mother Liaina.

“Being able to return home after the surgery has been possible through God’s grace and mercy,” she says.

Tali was diagnosed with a rare interstitial lung disease that caused inflammation and scarring of her lung tissues affecting normal functionality of her lungs.

The only treatment that could save her was a bilateral lung transplant.

She and her family moved to Suva, Fiji in 2015 as part of her career development with her employer, British American Tobacco. While in Suva Tali became very sick in July 2017 and went for further assessment in Auckland, New Zealand.

At the time, the doctors told her that her lung function has decreased dramatically and she would need to have a lung transplant, however she could not have it done in New Zealand as she is not a resident.

She was told to consider staying home for good and spend as much quality time with her family. As a result, she and her family returned to Samoa in September 2017.

Thinking of their young family especially their two children, Tali and Tusitala did not give up hope.

They instead sought help and assistance for options to get her across to any overseas facility that would take her in for such a major surgery despite recommendations from the Auckland Hospital doctors.

Eventually, Fortis Hospital in Chennai responded positively to her colleague who is now a pathologist at Motootua Hospital and that started the whole process of her medical evacuation to India.

“I am grateful to God for placing me under the care of Dr Satupaitea Viali, Dr Belladonna Potoi, Dr Folototo Leavai and Dr Filipina Amosa-Lei Sam at the time as these medical professionals worked around tight timelines to evacuate me from Motootua Hospital to Fortis Malar Hospital in Chennai India within a week of hospital admission”.

Lung transplantation is a major surgery and most centres charge over $500,000 tala for this type of operation not including hospital admission, investigations, accommodation, drugs and other related charges.

“I was fortunate to have the support of my employer, British American Tobacco via medical insurance as this immense cover contributed to most costs associated with the operation and transplant as well as our stay in Chennai for over a year;

“The insurance also funded all our travels including the Air NZ Air Ambulance Team that escorted us from Samoa to Chennai;

“I would like to thank the British American Tobacco leadership team in Australia, Fiji and Samoa for your generosity and understanding shown during this critical period,” said Tali.

“I also would like to thank the Prime Minister, Cabinet Ministers and the Government of Samoa for also assisting with costs that could not be covered by the insurance company;

The Government of Samoa did not have to cover costs paid for in full by the BAT insurance scheme so they assisted with organ airlifting charges estimated at USD$10,000 tala and one-month accommodation for Tusitala when Tali was in hospital ICU.

“Thank you also to the OVT committee for establishing relations with Fortis Hospital which made the transition and evacuation smooth”.

Tali and Tusi say that there were so many people praying for her and they made sure to visit the Carmalite sisters on the anniversary day to say thank you for the prayers.

“I am grateful to all my prayer warriors and ask that they continue to pray for us. All glory goes to God for so many chances and this second lease of life;

“I would like to think that I still have a purpose in this life as perfectly quoted by Erma Bombeck, When I stand before God at the end of my life, I would hope that I would not have a single bit of talent left, and could say, ‘I used everything you gave me”. 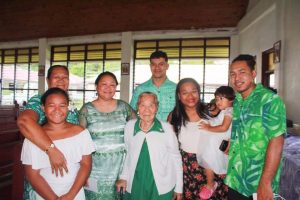 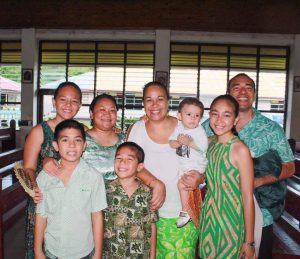 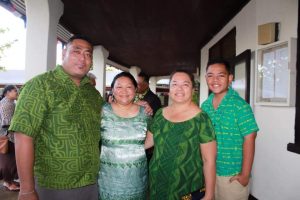