The General Manager of Samoa’s Electric Power Corporation has confirmed that Samoa’s power supply is in a “State of Emergency” and that the nation should prepare for more power cuts and a nation-wide rationing of electricity supply.

The whole of Upolu experienced an unexpected power outage for several hours on Monday afternoon when lightning damaged two of the four generators at Fiaga Diesel Power Plant, which generates 85 million kilowatts per hour annually, which is 65% of Samoa’s national power generation.

Speaking at a press conference this afternoon Tologatā Tile Tuimalealiifano confirned that the Fiaga Power Station had been directly struck by lightning, causing extensive damage to the diesel power generators. 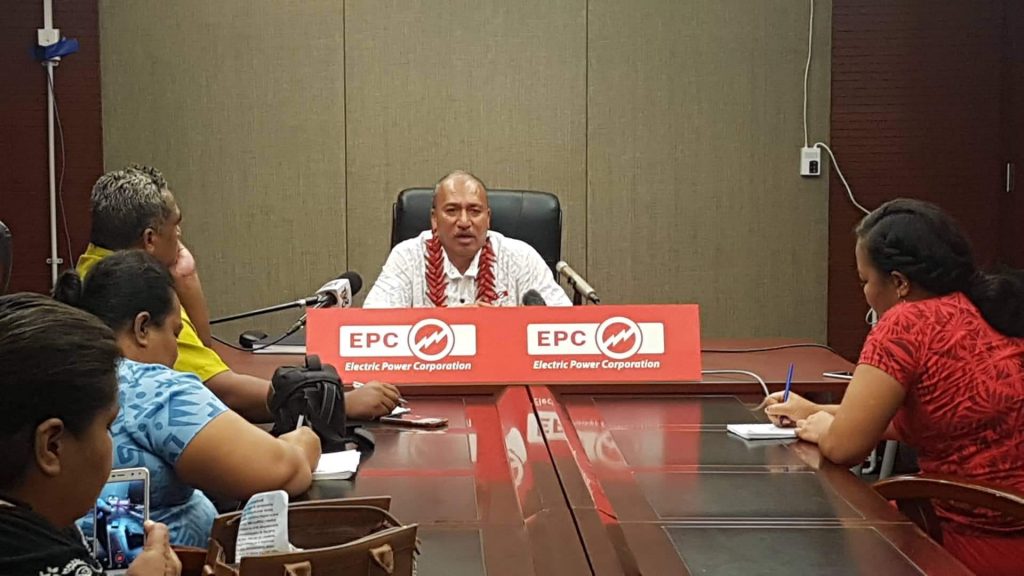 A Meterologist with the Samoa Met Services, Silipa Mulitalo confirmed that heavy thunderstorms and lightning had been forcasted over Samoa on Monday afternoon and the worst of it did hit at about 3pm.

The EPC General Manager said the disruption has left “only two generators operating at Fiaga and seven hydro power plants” which according to Tologatā is not enough to adequately supply Upolu.

“It is not enough to meet the power demand at the moment so we are still under a State of Emergency,”

“We are trying our very best to share what we have at the moment, but if worse comes to worse, we will have to shut off power or apply rationing to some parts of the country.”

Samoa’s sole supplier of electricity apologised to its customers for any inconvenience caused to businesses as well as to their domestic consumers.

“This has been caused by something beyond our control, it is an act of God.”

Tologatā went on to clarify that an Act of God is clearly defined in the EPC legislation as also attributed to climate change.

Tologatā says protection against lightning and thunderstorms is very much considered in the design of Fiaga Power Station, however the thunderstorms on Monday were worse than normal.

“Unfortunately the incident that happened on Monday afternoon was beyond the capacity of the design of the power station, it was very excessive.”

The General Manager confirmed that EPC engineers are currently working on the protective systems to ensure generators and power equipment are safeguarded from future thunderstorms and lightning strikes.

Asked about whether the Corporation would consider compensation for equipment and household appliances that are often damaged by fluctuations of power surges, and sudden cuts to electricity, Tologatā referred to the current EPC Act that does not allow EPC to pay compensation to companies and people affected.

Samoa opened its Fiaga Diesel Power Plant on the hills of Aleisa in April 2013. A press release at the time stated that, “the plant was intended to meet the entire power needs of the main island of Upolu, up to the year 2020”.

According to an ADB 2016 publication, the Fiaga Diesel Power Plant commissioned by EPC in 2013 is a US$100 million dollar project supported through the Power Sector Expansion Project (PSEP), to support rehabilitation and expansion of the Samoa power sector by the Samoa EPC.

“The project constructed a 23-megawatt diesel power plant for the main Upolu grid”. 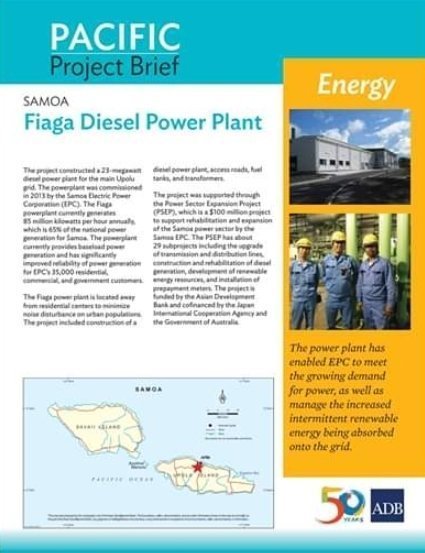