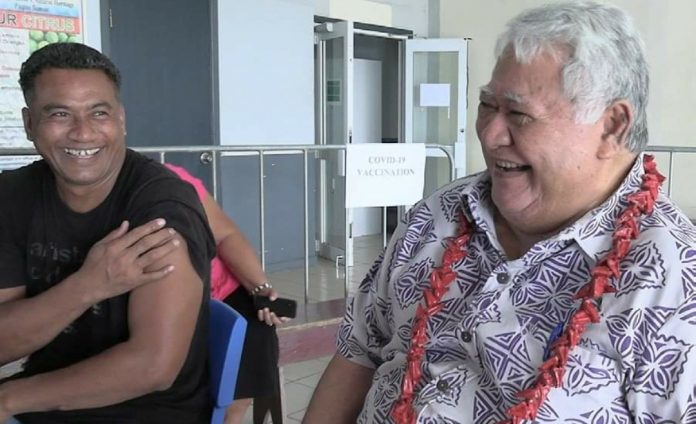 As of Monday 26th April more than 3,287 Samoans had received their first dosage of AstraZeneca Covid-19 vaccines.

According to National Emergency Operations Centre records, that number comprises  2076 men and 1,211 women.

Amongst them are Samoa’s frontliners who were given first priority, and the general population from the urban districts of Vaimauga 1 and Vaimauga 2.

Caretaker Prime Minister Tuilaepa Dr Sailele Malielegaoi was seen visiting the vaccination sites, enjoying himself and engaging with people as they received their shots.

Taking the lead to ensure public confidence in the AstraZeneca vaccine donated to Samoa through the global efforts of the COVAC facility, Tuilaepa was the first in the country to receive his vaccination jab last Sunday, joined by Samoa’s caretaker Minister of Health Faimalotoa Kika Stowers.

Speaking to Radio 2AP after his site visits on Tuesday afternoon, Tuilapa encouraged the nation to get vaccinated and gave his assurance that he has experienced no side effects whatsoever since he has had his first dose.

“The frontliners have also reported that they have had no side effects…I encourage you to make the right decision..” said Tuilaepa.

“Our total number from the COVAC assistance is 79,000 however Samoa is currently in talks with development partners such as New Zealand and Australia, for the rest..

“Do not panic or feel you have to rush to get in on this first batch of 24,000 as there will be enough for everyone and don’t forget, not all of us are vaccinated, it is limited to those 18 years and older.”

The NEOC Chair added that all those vaccinated shall receive a printed certificate of confirmation as a record of their covid-19 vaccination status.