The CEO of the Ministry of Finance revealed to his staff that he was given a letter from the Minister of Finance yesterday informing him that today (Friday) is his last day.

“Yesterday I received a letter from the Minister that today is my last day in the Ministry, or a “forced to resign” letter effective today. Well I have accepted it although it is very hard because my heart is to continue to serve the Government”, said Leasiosio who has worked as a public servant for his entire career. 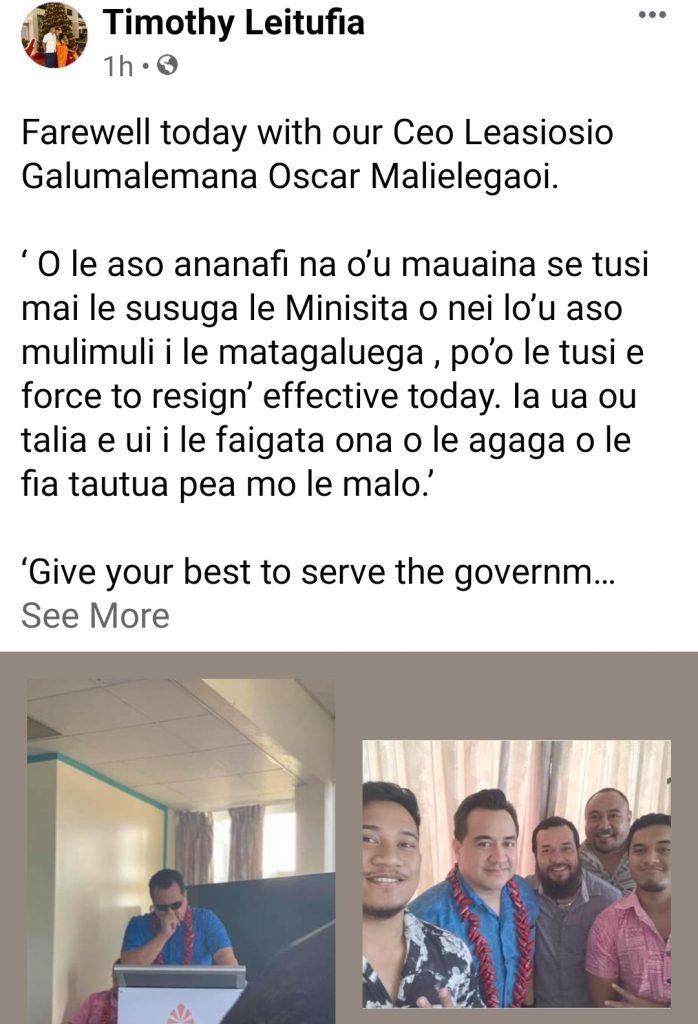 When Samoa Global News visited the Central Bank building this morning which houses both the CEO and Minister’s offices, the secretaries confirmed that Leasiosiofaasisina was in the conference room continuing his final debriefings and farewell sessions with the Ministry staff.

According to Leasiosio’s secretary, her boss was “terminated”.

“Actually he was terminated”, she told Samoa Global News.

Leasiosiofaasisina Oscar Malielegaoi as the CEO of the Ministry of Finance overlooks 13 divisions and over 300 staff.

Ministry staff are posting emotional tributes on social media, many observing that there is no difference between “termination” and being “asked to resign.”

A post on the HRPP’s official page yesterday afternoon stated the CEO of Finance had been terminated. Asked for a response the Minister of Fianance Mulipola Anarosa Ale Molioo dismissed the uncertainties around Leasiosio’s position as “misinformation”.

“It has come to my attention that there are rumours circulating (on social media especially) regarding the employment status of the CEO of the Ministry of Finance,” said Mulipola.

“Please ignore such misinformation, which does a disservice to both the CEO and myself.”

The Minister has been asked to confirm the letter given to Leasiosiofaasisina yesterday, and to outline the grounds for her position.