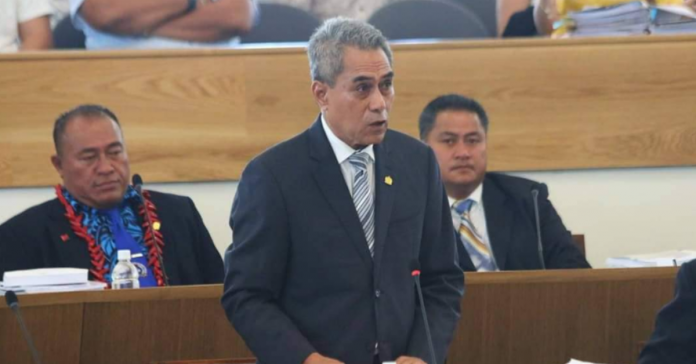 29 May 2019, Apia Samoa. Samoa’s Minister of Finance Sili Epa Tuioti has announced Government’s 2019/20 budget estimates with an overall deficit of $28.5 million tala (US$10.7m) equating to 1% of Gross Domestic Product in a budget address that highlignted the need to reduce debt distress on Samoa while ensuring the nation has fiscal space to cater for external shocks and impacts of natural disasters.

“I am happy to announce that the 2019/20 budget will only register a 1% deficit of GDP; 2.5% lower than the current financial year. This is in line with the Strategy for the Development of Samoa and supports another of Government’s fiscal targets to reduce its debt ratio to within 40% of GDP therefore reducing debt distress risks,” announced the Minister.

“Risks to the global economy remain high in addition to the ever threatening effects of climate change on our small island country,” said Sili.

The Minister’s budget address delivered in Parliament yesterday estimates revenues of $826.6 million against expenditures of $913.6 million tala for the coming year.

The 2019/20 financial year records a fiscal deficit of around $87 million tala, however, the Minister clarified that accounting for Government to Government revenues and expenditure further narrows the deficit to $28.5 million tala, “ultimately establishing the estimated 1% of GDP budget deficit for the new fiscal year”.

The Minister of Finance stressed the importance of striking a balance between the competing priorities of providing services for today’s generation while building for the longer term future of Samoa.

“Today as we stand at a crossroads, I am delighted to announce that Government will soon launch a long term policy statement that identifies key economic sectors with the potential of transforming Samoa’s economy to a higher growth path by the year 2040;

“The forward looking Samoa 2040 takes a longer term perspective that is central to our development agenda.”

The Minister added that the new fiscal year budget has therefore been developed and will be implemented around the theme of “a shared vision for prosperity”.

The Miniister affirmed a commitment to hold regular dialogue with Samoa’s private sector and increase opportunities for the voice of business to policy development. “I am pleased to announce our continued close partnership with the private sector in recognition of their contribution to the economy.”

“The 2019/20 Budget comprises a mix of priorities that will push not only the key transformative sectors of the economy but will also stregthen remainng sectors to provide the necessary support for Samoa 2040”, said Sili.

Samoa’s total domestic revenue is expected to increase by 3% or $18.4 million tala from increased tax collections and hosting of international events.

Samoa’s impeccable reputation of hosting high level international events was highlighted as one of the key contributors to conomic growth.

Sili stated that it was vital to note the significant impact of hosting various conferences and international events “which greatly assists with advancing the state of development and economic growth each year”.

Special mention was made of Samoa’s recent bid to host the signing of the ACP-EU agreement in 2020, which brings this event to the Pacific region for the first time.

“Growth is anticipated to continue into the new fiscal year at around 4.9% associated with the hosting of the Pacific Games as well as the ACP Fisheries and Aquaculture Ministers meeting, the Regional Energy and Transport Ministers meeting, and the Pacific Ocean Climate Change conference in addition to continued bridge and road works, port developments and the waterfront development,” reads the Minister’s Budget statement.

Grants from Samoa’s development partners are expected to decline with the near completion of various projects such as the Pacific Resilience Program, the Advanced Road Access Project , the Civil Society Support Program and the Education Sector Budget Support.

Total expenditure of $914 million tala represents a drop by 3% however the expenditure programs of Ministries is expected to increase by 3.4% due to planned activities such as the Cost of Living Adjustment (COLA) and the NPF increases which both impact Government salaries.

The Pacific Games has been allocated a budget of $15 million tala while the Samoa Rugby Union receives $500k towards its World Cup preparations.

Under the Ministry of Communication and Information Technology  “$12.5 million in grant development projects for the Communication sector”.

A Hardship Scholarship scheme was announced for the National University of Samoa to assist students who achieve academic excellence but are hindered by financial hardship in their families.

The One Government Grant assistance to schools will get $14 million while NUS and SQA receive $11.25 and $4.1 million respectively.

Local infrastructure projects include the Tiavea airport, a new road at Vaiaata/Patamea, a new building for OEC and a 5 storey building at Savalalo. Overseas, there is an allocation for a new High Commission in Wellington and a new Consular building in American Samoa.

Members will be given the opportunity to debate the budget when parliament resumes on 18 June 2019.