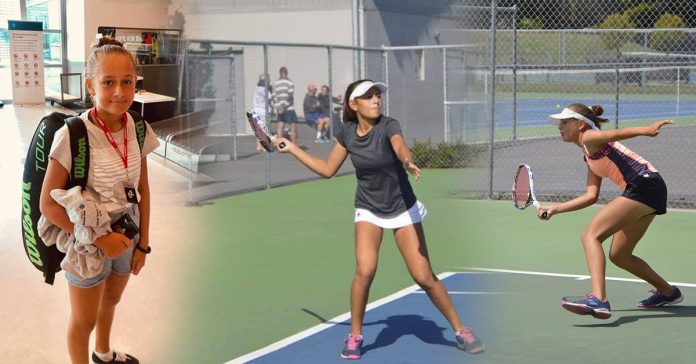 24 January, 2019, Wellington New Zealand. Mahinarangi Tuala Warren is Samoa’s rising tennis star who has set herself the goal of becoming New Zealand’s No1 player for the Under 12s division.

The 11-year old of Samoan-Maori decent competed in the New Zealand Under 12 Championship tournament held in Christchurch last week. Mahina was placed 9th in a field of 32 and lost only one singles match which was against the Australian 2nd seed.

Mahina as she is known to family and friends represented Pacific Oceania for the Individuals and Waikato Bays for the Team events at the New Zealand Championship tournament.

Speaking to Samoa Global News, Aidan Warren says that it is Mahina’s goal to become No1 for New Zealand’s Under 12 before the end of the year.

“She went into this tournament ranked about 22 in NZ for under 12 and 3rd for her actual age group which is 11.

Mahina and her doubles partner Ruth Baantarawa from Kiribati pulled off a major upset at last weekend’s New Zealand championships.

The Pacific duo made the semi finals of the Under 12 Doubles upsetting the NZ No 2 seeds 10-8 in a super tie breaker. They went on to play a hard fought semi final match against New Zeland’s 2nd and 4th seeded players, losing narrowly in a tie breaker: 7-5, 7-6, 8-6.

Aidan Warren adds, “It’s a great result for Samoa and Kiribati tennis and shows that even when there are limited resources our Pacific girls can compete on the big stage.”

Kiribati has only 2 courts on the island.

Mahina first played tennis at the age of 6 under Yvonne Carruthers and the Vailima Tennis Academy’s development program.

Mahina is a two-time champion of the Pacific Oceania Under 12s held in Lautoka each year. She has won the Takapau Open Women’s Doubles with her coach and Samoan tennis legend, Steffi Carruthers. Mahina has also competed in the Australian Under 12 Champs.

“She also played in the open women’s grade at the New Zealand Maori Champs and open mixed doubles with her older brother Phillip,”

Mahinarangi Warren is on track to achieving her goals having secured a scholarship to attend the International Tennis Federation (ITF) Pacific Training Centre in Lautoka Fiji, which she will take up when she turns 12 in May.

Players training at the Centre in Fiji are accommodated in the ITF House, attend school and participate in a full week’s training programme incorporating two daily on-court sessions and regular fitness training sessions. Players have the opportunity to be selected from there for ITF regional junior teams, which compete in higher level events in Australia and New Zealand in July and December each year.