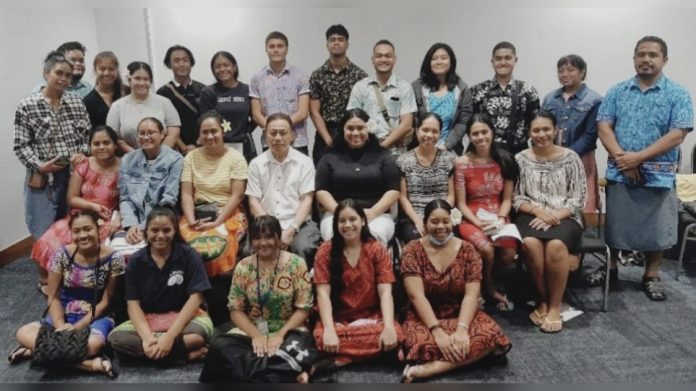 Samoan High Commission (Fiji) Press Release. There are 62 Samoan students enrolled to study at USP Fiji campus in this first semester of 2022, with females outnumbering males by almost 2:1.

“Overall, female students outnumber their male counterparts by 40 to 22,” states a press release by the Samoa High Commission office in Fiji.

“There are 47 students studying under scholarship awards, while 15 are privately funded”.

Of the private students, girls once again outnumber the boys – with 11 females and 4 males.

This is a drop from last year’s numbers where there were 54 sponsored students and 20 private.

Samoan students at the USP Fiji campus organise themselves under the umbrella of an established USP Samoa Students Association which had its first meeting for the 2022 academic year last week on the 3rd of April 2022 under its new Executive Committee. It was also a chance for students to meet the staff of the Samoa High Commission office in Suva.

The President for 2022 is Ms Tuala Faivae Lula, assisted by Mr. Shaun Asafo as Vice-President. The Treasurer duties will be taken up by Ms. Leitu Fereti, and Mr Amosa Togia is the Association’s Executive Secretary.

Leading the sports programmes for the year will be Mr. Talia Toá, elected as Sports Chair, while Ms. Taefalaula Brown takes up the role of Public Relations Officer.

The first official gathering of the student body was opened by Samoan Student Counsellor Taito Louis Lene who delivered welcoming remarks, a scripture reading and a prayer to start off the meeting. Association President Tuala Faivae Lula then moved in to Chair the meeting.

Students introduced themselves, sharing their villages in Samoa, and their programmes of study, and the number of years they had been at USP. The Association then considered and approved its financial report, membership fee, registration drive, sports events and social activities for the year.

The meeting was concluded with words of encouragement by Samoa High Commissioner to Fiji, Allioaiga Feturi Elisaia. He reminded the students not to lose sight of why they came to Fiji in the first place and the need to remain focused and committed to complete their studies on time.

The High Commissioner told students that their academic achievements will be their personal assets for life, “which they can use as equalizers to break down economic, social and gender barriers”.

According to the press statement, the High Commissioner zoned in the sponsored students in particular.  “He urged them to be humbled and appreciative of the “privilege”, not a right, provided via the scholarship awards to further their education pathways, rare opportunities many Samoan students can only dream and wish for, without luck at all”.