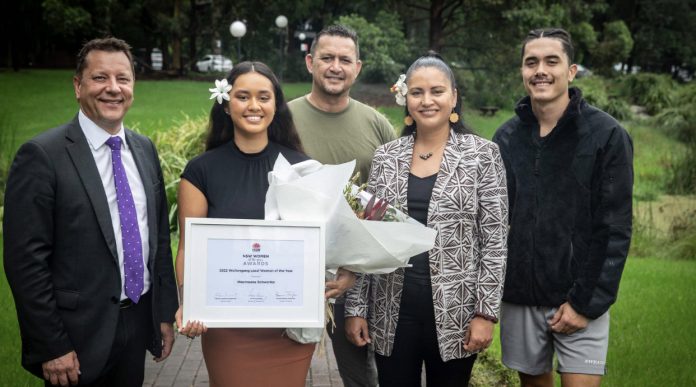 In March this year, Samoan climate activist Moemoana Schwenke was the youngest among the New South Wales Women of the Year Awardees for 2022. The Samoan-born University of Wollongong student had travelled to Glasgow last year to speak on behalf of Pacific Island nations at the climate conference.

Ms Schwenke was the MP for Wollongong, Paul Scully’s pick for the electorate’s Woman of the year, after she travelled to Glasgow to speak at the COP26 climate change conference.

State MPs were asked to select a Woman of the Year in each electorate as part of the NSW Government’s Women of the Year Awards, which recognise and celebrate the “outstanding contribution made by women across NSW”.

“I’ve been struck by Moemoana’s commitment and dedication to advocating on behalf of the Pacific Island nations and promoting their culture among our community. Her actions put Wollongong on a world stage, which we’re grateful for,” Paul Scully said.

At 21, Moemoana is the youngest recipient of the award so far. She is currently undergoing a double degree in Indigenous Studies and Environmental Humanities alongside Communications and Media at the University of Wollongong.

“It’s a great honour to receive this award in my hometown of Wollongong, where I spent most of my childhood. When I was going to school, there weren’t many Pacific Island people around. My grandmother, Moe Faatafa Nini, was one of the first Samoans who arrived in Wollongong. She came in 1972 to work at Wollongong Hospital,” Moemoana said.

Moemoana has done inspiring climate advocacy work, continuously amplifying the voices of Samoa and the Pacific on the international stage.

The Pacific Island nations are continuously experiencing the effects of climate change from accelerated sea level rises to longer and more intense heatwaves, exacerbated natural disasters like floods and cyclones and even progressing coastal erosion.

“What is happening now in the Pacific Islands will happen worldwide, so our message is crucial,” Moemoana said.

In addition to her climate activism, Ms Schwenke is one of the few female Siva Afi performers in the world, which is a traditional Samoan dance. Moemoana works to teach Pacific youth about cultural artforms and is writing and co-directing a Pacific dance and theatre production staging in April.

“The Illawarra has such a rich multicultural community, and it’s so important this continues through with our younger generations as well,” Mr Scully said. “”By being a young woman performing Siva Afi, and teaching other young people from the Pacific Islands about their culture, Moemoana is also continuing to enrich the multicultural fabric of our community within her own generation”.

In 2019, she competed in the World Fire-Knife Championships in Hawaii and placed at the 1st Runner Up in the Women’s division.

As the daughter of Maryjane Mckibbin Schwenke, former Miss South-Pacific, Moemoana was born to be a creative performing artist advocating for Indigenous Cultural Preservation. Moemoana has broad knowledge on pacific cultural dance disciplines which she enjoys teaching at her family owned cultural center Matavai Pacific Cultural Arts’ in Sydney.

Ms Schwenke, whose first name means ‘calm ocean’, first became concerned about the effects of climate change at 14 before joining the The Pacific Climate Warriors, which is fighting to raise awareness of the plight of Pacific nations when it comes to climate change.

“Women are much less represented in the public domain. I am very grateful to all the strong female leaders who came before me and paved the way. And my message to all young women is that no matter your gender, race or class, you can achieve anything you want. Just keep going,” she added.

Alongside the likes of Brianna Fruean, Okalani Mariner and Mary Moeono-Kolio, Moemoana Schwenke is a proud member of Pacific Climate Warriors, a network of Pacific youth who stand up to show the world that in the face of Climate Change, they are not drowning, rather they are fighting.