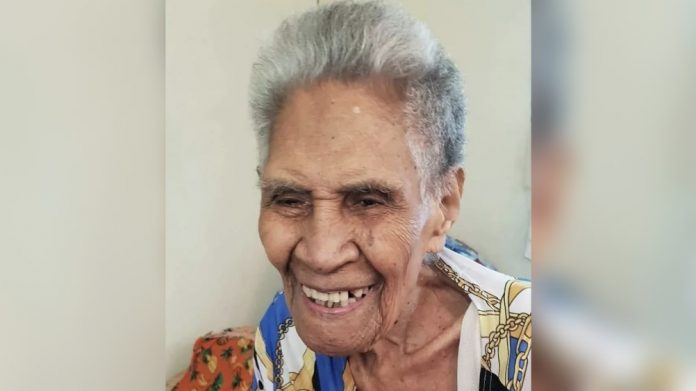 26 April 2022, Savaii, Samoa.  Another of Samoa’s centenarians, Emma Pailate Eteru of Asau, Savaii celebrated her 107th birthday on the 17th of March – just days before Samoa went into Covid-19 lockdown.

Sharing with Samoa Global News, Mama Emma Pailate Eteru’s granddaughter, Gaualofa Loi, said there are now five generations from her grandmother, with some of her own generation now grandparents themselves.

“She and our grandfather had 11 children, but our grandpa passed away many years ago.”

Gaualofa said she could not count the total number of them, but Mama Emma Eteru has 44 grandchildren from her 11 children, “and some of us are grandparents ourselves..”

Gaualofa’s mother, Faaosofia, lives in Asau and is the main caregiver for Mama Emma.

“My mother’s siblings, and their children, we are all living at our family home in Asau village, and we all help to take care of our grandmother.”

Gaualofa says her grandmother is not as strong as she used to be, especially in recent years, however, she can still stand and walk around to strengthen her legs and body.

Gaualofa says Samoa’s 107 year old centenarian keeps a nutritional diet of healthy foods from farm to table, which they carefully prepare for her each day.

Gaualofa says her grandmother has a sense of humour, and loves to spend time with all of them, her children.

“We love our grandmother so much, she is a lovely mother with a loving heart, and we love and adore her so much.”

Last week on April 20th in Tufulele, another of Samoa’s centenarians, Mrs Tele Semu, celebrated her 102nd  birthday with her family. Mama Tele is a 20th April baby.

The United Nations predicts that there are 573,000 centenarians currently in the world, almost quadruple the 151,000 suggested to have been alive in the year 2000.

According to a 1998 United Nations demographic survey, Japan is expected to have 272,000 centenarians by 2050; while other sources suggest that the number could be closer to 1 million. The incidence of centenarians in Japan was one per 3,522 people in 2008.

Japan is amongst the top in the world for the number of centenarians, but there are considerably more females than males. In the year 2016 Japan had 57,525 female centenarians, while there were 8,167 males, a ratio of 7:1.

A supercentenarian, sometimes hyphenated as super-centenarian, is a person who has reached the age of 110 years, something only achieved by about one in 1000 centenarians.