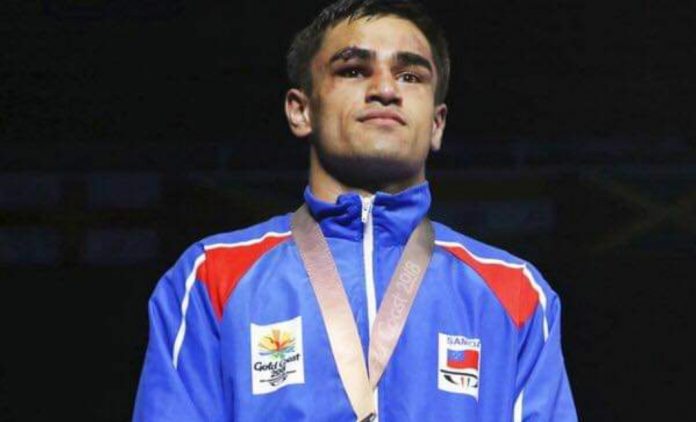 Samoan Commonwealth and Pacific Games medalist Tupuola Seua’i Ato Plodzicki-Faoagali  says he would not be where he is now if it weren’t for the support of his parents.

Tupuola Seua’i Ato received a letter this week from the International Olympics Committee informing him he has qualified to compete in the 2021 Olympics.

He will join fellow boxer Marion Faustino Ah Tong who has also qualified for the Olympics.

At 22, he has already won silver at the 2018 Commonwealth Games held at the Gold Coast, Queensland and in the 2019 Pacific Games, he won gold for Samoa on home soil in Salelologa, Savaii. He competed in the lightweight division at the time and was part of the Samoa boxing team who took out a clean sweep 7 golds and 1 bronze.

Speaking to Samoa Global News, Tupuola Seua’i Ato said he will be competing in the men’s heavyweight 81 to 91 kilogram division in the 2021 Olympics.

He shares that this has always been a dream for him growing up, and he was shocked to receive the emailed confirmation from IOC.

“It feels unreal because I’ve been dreaming about this moment since I was a kid,” he said.

He expressed his gratitude to his parents for their never ending support and his family for staying in his corner despite the challenges.

“I’m most grateful to my parents for helping me throughout my whole career, with everything from funding my boxing training camps, and attending tournaments,” he said.

“Since I started very young, Dad has always been my trainer and he always believed in me, especially when others didn’t give me a chance…

“Mom managing all my paperwork, food preparation and just being the best sports mom any athlete could ask for”.

Tupuola also thanked the Marist St Joseph’s Boxing Club in Samoa for taking him in as one of their own, as well as Samoa’s Association of National Sports and National Olympic Committee (SASNOC) for their continuous support.

“And I’d also like to thank the Samoa Boxing Federation for all that they do on a voluntary basis to develop boxing in Samoa,” he added.

Ato Faoagali joins 7 others who have already qualified to join Team Samoa at the Tokyo Olympics, postponed due to the global coronavirus pandemic with organisers still optimistic for July this year.

With only 3 months to go, the Samoan boxer says his preparations are well underway.

“This is the pinnacle of my sport and I know it wwill be a level-up in competition from the Commonwealth games, so I would have to step-up my preparations also, in all areas of boxing training,” he said.