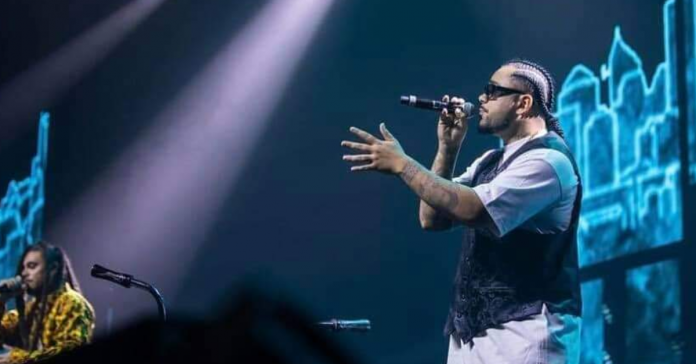 29 May 2019, Apia Samoa. Samoan born rap artist “Poetik’ whose real name is Ventry Parker is amongst the artists who are in Samoa for the Seki Fest concert held on Friday 30th May at Taumeasina Island Resort.

He is the son of famous Samoan artist Faasavalu Dave Parker who hails from the villages of Fugalei, Tapatapo, Falelatai and Lano, Savaii.

Poetik told Samoa Global News that chasing a hip hop career here in Samoa was not easy, so he had to leave the country to pursue his dream.

He said that he was always passionate of becoming a rapper and knew that he could not sing like his father.

“I cannot sing,”, he saya smiling.

“So I had no choice; I started doing rap music because it was the only thing I could do at the time and because I was always passionate about hip hop,” he said.

“And what started to mold and shape the kind of music that I did was our environment;

“I would talk about the hard times here in the island, for example as I was growing up we had no food;

“While I was in school I would only have one tala for a keke puaa (pork bun) but I had to share it with my cousins.”

“I mean one can of elegi with rice to share amongst five of us;

“Poverty was the hardest obstacle.”

The father of 4 said he had moved for a better life and better opportunities for his music career but he did have to face racism within the New Zealand music industry.

“It’s probably one of the things that most people don’t like to hear or discuss,” he said.

“In the music industry I got to see that the darker your skin or the lighter your skin is defines what is going to happen to you as an artist and who will say yes or no to you.”

Poetik said he never expected things like this to happen in the music indstry, however he discovered that this happens everywhere and in any kind of job or business.

Ask how he was able to overcome it Poetik told Samoa Global News that he had to build a thick skin.

“I had to keep going and along the way I also found out that our own people were other ones who were attacking me as well,” he said.

“They attacked me for using profanity in my music or for doing songs that sound a bit too graphic.

“But this is how I express myself in my music and artists are different with the way they do their musics however, it got better and
throughout my journey I see that we are getting through.”

Poetik advised young Samoans who want to pursue music as their career to keep an open mind to everything.

“As Samoans we learn by listening and watching and most of the time we don’t have to be taught and that’s the best way,” he said.

“Just observe and be conscious of what’s going on around you.”

Poetik is looking forward to Friday and he hopes that everyone will enjoy the concert.