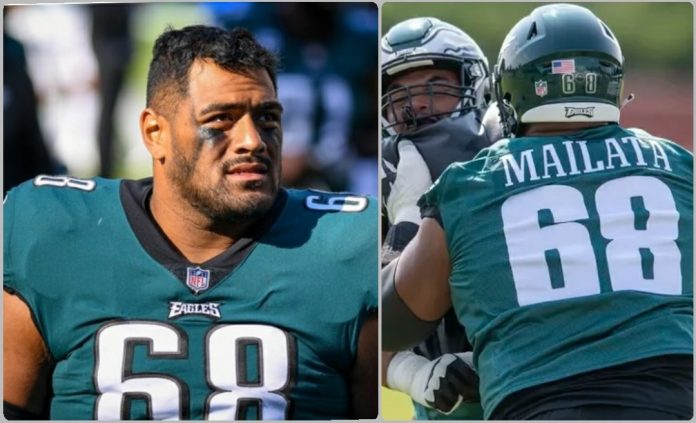 It is the biggest contract ever earned by an Australian in the NFL, reported to be $USD80M if he meets performance-based bonus clauses.

The 24 year old was born in  Bankstown Sydney and grew up playing rugby league in Sydney Australia. In 2015 he played for the Canterbury-Bankstown Bulldogs Under 18s before moving to the South Sydney Rabbitohs where he played 12 matches for their Under 20s side.

Mailata’s success story is uncommon as the pursuit of his dream for a National Football League (NFL) contract had taken the path less travelled having not grown up around American football or come through the hundreds of College Football players competing for spots.

In 2017, the 6ft 8” Offensive Tackle left Australia for America via the International Player Pathway Program, a scheme run by the NFL to grow the sport globally and provide a pathway for players from outside America to play football.

A year later the Eagles drafted Mailata with the 233rd overall pick and signed him on a 4 year US$2.5 million dollar rookie contract with a signing bonus of US$89,392.

Mailata became the second player to be drafted with no American high school or college experience after German Moritz Böhringer, following the path of compatriot Jarryd Hayne, who had also converted from rugby league.

Last year the Eagles starting Left Tackle Andre Dillard suffered an injury.  Dillard was drafted in the first round in 2019 to become the Eagle’s starter of the future to replace Jason Peters. Dillard’s biceps tore late in the summer ending his second NFL season before it began.

The Eagles moved Jason Peters back to left tackle but when his body began to break down, they eventually gave the third-year man and former rugby player a chance to get out there.

Still a relative newcomer to the sport, Mailata took advantage of the opportunity handed to him. He played most of the season with 15 NFL games, starting in 10 of those. When Dillard returned from injury the coaches made it clear there was competition for the spot.

With the 4 year deal, Mailata has been backed to be the one that holds down the Philedalphia Eagle’s left tackle spot for the next decade, not Dillard.

Mailata’s salary is the equivalent of approximately ST$41 million tala a year or $164 million before taxes over the four years.

For those with zero football knowledge, Mailata’s position protects the quarterback from being touched or tackled. Hence why left tackles are the highest paid players on offense. Their job is to match up with the defenses’ best pass rusher and keep them away from the quarterback. “Doing so requires elite size, strength, speed, and most importantly, footwork”.