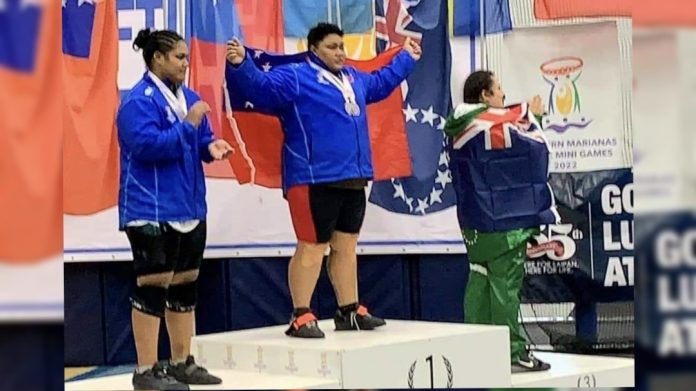 Iuniarra Sipaia and Lesila Fiapule have dominated the women’s heavyweight division at the Saipan Pacific Mini Games. Sipaia won 3 gold medals, smashing both the Pacific and Oceania Records for the 87+kg women’s division. At the last Pacific Mini Games in 2013, Sipaia had won gold for the 75kg category.

Lesila Fiapule also won a gold medal in the snatch of the 87+kg women’s division. Lesila has been lifting since she was 15 years old, and represented Samoa in the 2018 Youth Olympic Games in Argentina.

Iuniarra, 28, has represented and won gold for Samoa in previous events. She won three gold medals in the over 75kg category at the 2016 Oceania Weightlifting Championship.

During the 2011 Pacific Games, when she was only 18 years old, Sipaia won bronze for Samoa. Three years later at 21, she was able to represent Samoa at the 2014 Commonwealth Games and competed in the women’s over 75kg category.

She was also the part of the Samoan delegation which made its debut at the 2017 Asian Indoor and Martial Arts Games and claimed a bronze medal in the women’s +90 kg event.

Samoa’s Tovio Ah Chong, at just 15 years old, came in fourth for the 140kg division but the youngster’s lift has set a new Oceania Youth record for the 140kg Clean & Jerk.

The Samoa Weightlifting Federation opted for a young team to the Pacific Mini Games 2022 in Saipan, led by Tupuola Niusila Opeloge as coach.

“Most of them are competing for the first time on the international scene,” said President and National Coach, Tuaopepe Jerry Wallwork in an interview with SGN earlier this week.