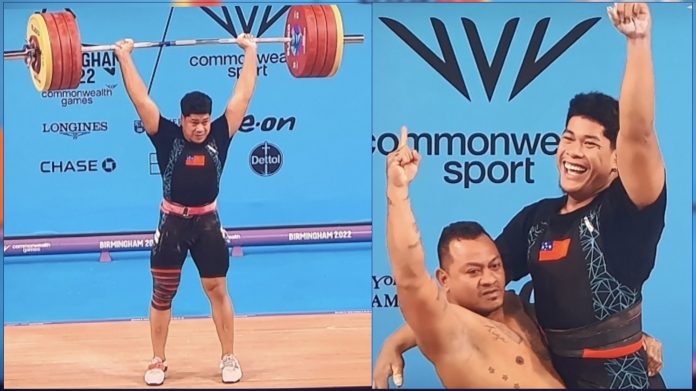 Samoa have won their first gold medal at the 2022 Birmingham Commonwealth Games after Don Opeloge took out the men’s weightlifting 96kg category with ease.

Opeloge, who had won a silver medal for the 85kg category at the Gold Coast Commonwealth Games in 2018, was determined to turn that into a gold for Samoa.

Cheered on by vocal Samoan supporters in the stadium including the entire Manu Samoa 7’s squad, Don Opeloge smashed through his own personal bests and set new Commonwealth Games records.

Don Opeloge wrote himself into the history books with his 381kg total going down as the new  Commonwealth Games record for the men’s 96kg category.

Securing gold with still two more lifts to go, it almost looked like a training run at the Tuanaimato High Performance gym for the Samoan weightlifter. He stole the show and won the hearts of the crowd as he beat out silver medalist Vikas Thakur of India by more than 30kgs.

Fellow Pacific Islander, Taniela Rainibogi from Fiji worked hard and put himself in position to secure the bronze medal.

After the medal presentation, Opeloge took off his red ulafala and placed it around the neck of his Pacific brother from Fiji.

As the Samoan national anthem was played, the choir of Samoan supporters in the crowd sang patriotically to Samoa Tulai.

Next up for Samoa’s weightlifters is Jack Opeloge, competing in the men’s 109kg category, on Wednesday night at 9:30pm (Samoan Time).

Following him will be Commonwealth Games gold medalist, Feagaiga Stowers, who is competing in the women’s 87+ kg category.