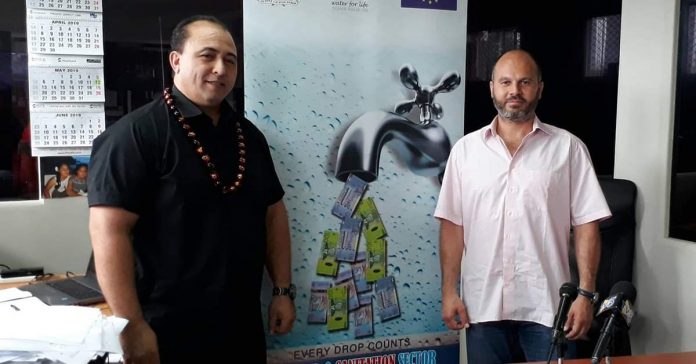 17 May 2019, Apia Samoa. The Samoa Weightlifting Federation is ready to host 300 lifters and 20 international technical officials from around the world during the Pacific Games in July.

This was confirmed by the Director General of the International Weightlifting Federation, Attila Adamfi during his 3 day visit to Samoa earlier this week.

“The event is not only for the Pacific Games, there will also be the Oceania Championships and most importantly it’s the qualification event for the Tokyo 2020 Olympic Games, all happening at the same time here in Samoa,” he said.

Adamfi said that the decision to hold all three tournaments at the same time as the Pacific Games was a cost effective solution by the Oceania Weightlifting Federation because most of the competing nations are commonwealth countries.

“They will save in travel costs if they can compete for all competitions at the same time and in the same location,” said the Director General of IWF.

Asked if Samoa was ready in terms of the venues and facilities the Director General said yes.

“To be very honest I have had the easiest job during my visit here in Samoa,” said Mr. Adamfi.

“When we (I.W.F.) found out that Samoa is the host country for these tournaments, we immediately felt confident because we already know Samoa is a powerhouse of Oceania in organising such event’s,” he said.

“We knew the games would be in good hands under the control of the President and Head Coach of the Samoa Weightlifting Federation, Tuaopepe Jerry Wallwork;

“The venue is perfect, it has already hosted many competitions and most importantly, the hospitality by the Samoan people will no doubt provide a great experience for every visitor and every athlete here to compete and get qualified for the 2020 Tokyo Olympic Games.”

Mr. Adamfi said that lack of experience was usually the fault of hosting nations when preparing for international events.

“Here in Samoa, we are 100 percent confident that we have nothing to worry about because weightlifting is an experienced sport and they have already organised several international competitions, so to be honest, the event will be in capable hands and we cannot see any major challenges,” he said.

“This also shows that the standard of the competition is at a high level and we believe that everything is provided here and guarantees a top competition.”

Lastly, Mr. Adamfi said the President of the International Weightlifting Federation, Dr. Tamas Ajan will also be visiting the shores of Samoa during the competition.

“He loves the country and respects the work Tuaopepe Jerry Wallwork is doing here and I believe he won’t want to miss this great opportunity to visit Samoa again.”