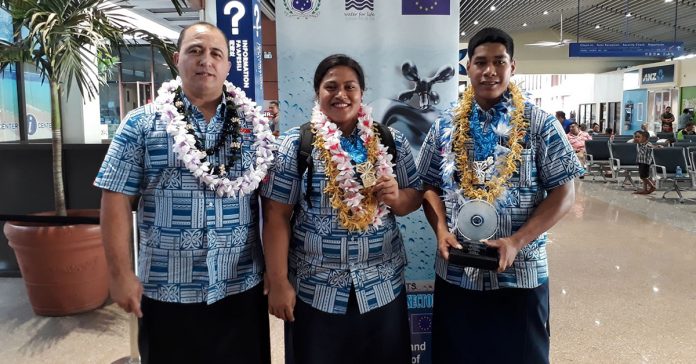 Fepuleai on behalf of SASNOC congratulated the team as well as the President and Coach Tuaopepe Asiata Jerry Wallwork, for putting Samoa on the map.

He added, the standard of the competition that they participated in Fiji, is much higher than the Pacific and the Commonwealth games.

“The games you’ve just participated in is at a level much higher than the Pacific or Commonwealth Games, they closer to the level of the Olympic games,”

Fepuleai congratulated the athletes and reminded them that prepararions are ongoing with the Pacific Games, now just four weeks away.

Fepuleai encouraged them to work to their potential, and continue to put Samoa on top by winning more medals in the Pacific Games.

Speaking to the media Tuaopepe Asiata Jerry Wallwork said team Samoa aimed for the top and at the end they came through.

He added that this is the first time in 30 years the team have won gold medals at the Youth World Championships.

Tuaopepe said their next focus now is the Pacific Games with the team going into training camp from now until the games.

“We are hosting so we are aiming for medals to commemorate this great milestone of Samoa hosting the Pacific Games,”

The team will start training today and in the next few weeks will select a team to represent Samoa in the Pacific Games next month.