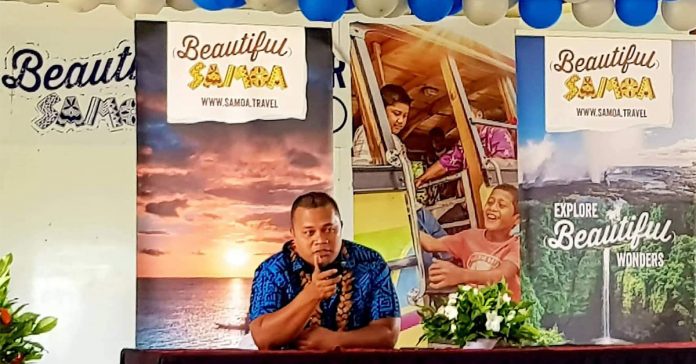 11 June 2019, Apia Samoa. The new Chief Executive Officer of the Samoa Tourism Authority Fa’amatuaina Lenatai Suifua was officially welcomed by Board of Directors, Management and staff during an ava ceremony held at the STA Fale yesterday morning.

Fa’amatuainu takes over from outgoing CEO Papalii Sonja Hunter who held the position for over 10 years and did not reapply this time around.

During his speech the new CEO said he would focus on working together, and that collaboration was needed for the success of  the tourism inudstry.

Speaking to the media Fa’amatuainu said that tourism is a key priority area for Samoa’s economic development so the expectations of the community are always high.

The new CEO says that he would be looking at new ways to lift the standard of tourism development to the next level and this needed to be done together with their partners, especially the business sector and the community at large.

Faamatuainu was previously an Assistant Chief Executive Officer (ACEO) in the Samoa Tourism Authority, for the Planning and Development Division.

Married with three children, the 37 year old CEO comes from the villages of Vaisala, Moataa and Lufilufi.

Visitors Prefer Samoa Airways Over other Airlines – Samoa Bureau of...