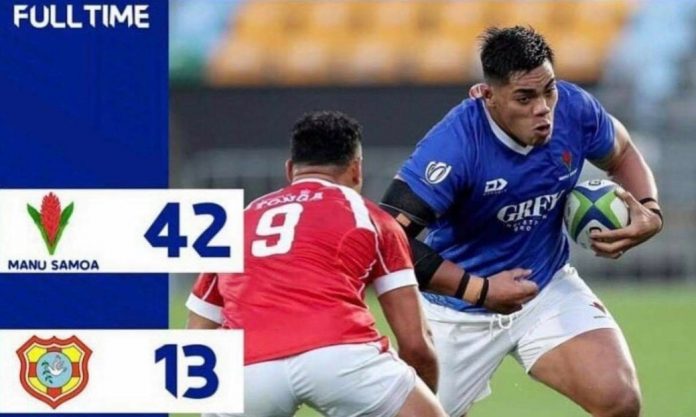 With this 42-13 win under their belt, Samoa now have a 29 point advantage before they play the second RWC qualifier next week.

The first 15 minutes consisted of error after error by both teams, but Samoa soon settled into the match to show flair, form, team structure and great individual performances to secure the win.

Despite dominating territory and possession it was Samoa who conceded the first points by way of a Tongan penalty kick.

The Ikale Tahi 3 point lead did not last very long as Samoa answered with their own 3 pointer through Henry Taefu’s boot.

Tonga responded well after conceding points by gaining possession off their own kick-off to go straight into attack. Phase after phase the Tongans attacked but the Samoan side absorbed every wave of the  Tongan tsunami.

The solid Samoan defence was soon rewarded with a penalty and just like that the boys in blue were in attack.

Samoa stuck to their processes and soon found themselves in try-scoring territory. The Manu earn a penalty and Taefu’s right boot put Samoa ahead by 3 after 40 minutes.

Henry Taefu definitely brought his kicking boots, and in the second half and converted another penalty for Samoa.

With a 9-3 lead, the Samoan confidence started to show. Off a Ray Niuia turnover the Samoans went on the attack. Prop Tietie Tuimauga channeled his inner Daniel Carter and threw a no-look pass to Stacey Ili who sliced through half a gap.

Samoa go the same way back to Tuimauga again, who this time channeled his inner Sonny Bill-Williams with a one-hand offload that allowed Ben Nee-Nee to break down the left edge. An easy draw and pass put Niuia away for the first try of the match, well deserved by the hard working front rower.

Leading 16-3, the Manu started playing with a bit of razzle dazzle. An inside ball put Henry Time-Stowers into acres of space. Tonga bring him down 5 meters short of the line but a quick pick-and-go by Alamanda Motuga put him over for Samoa’s second try in 10 minutes.

Tonga, as you would expect, weren’t just going to give up. All they needed was half a gap and that’s exactly what they got. A flat ball to the Chiefs loose foward Viliami Taulani put him through a gaping hole. He eased past the fullback and Tonga closed the lead to 21-10.

Samoa looked to have all the momentum but the men in blue were had come out firing in the second half.

Rodney Iona threw a terrible pass to Neria Fomai. Fomai wasn’t phased by the poor pass as he put together footwork and silky skills to unlock a raging Henry Taefu who put it in 6th gear to run away with Samoa’s 3rd try. Taefu converts his own try

The floodgates then opened as Samoa started to play with flare.

Iona placed a cross-kick over for Ed Fidow who put on the after burners to beat Tongan defenders as he goes over for Samoa’s 4th try. 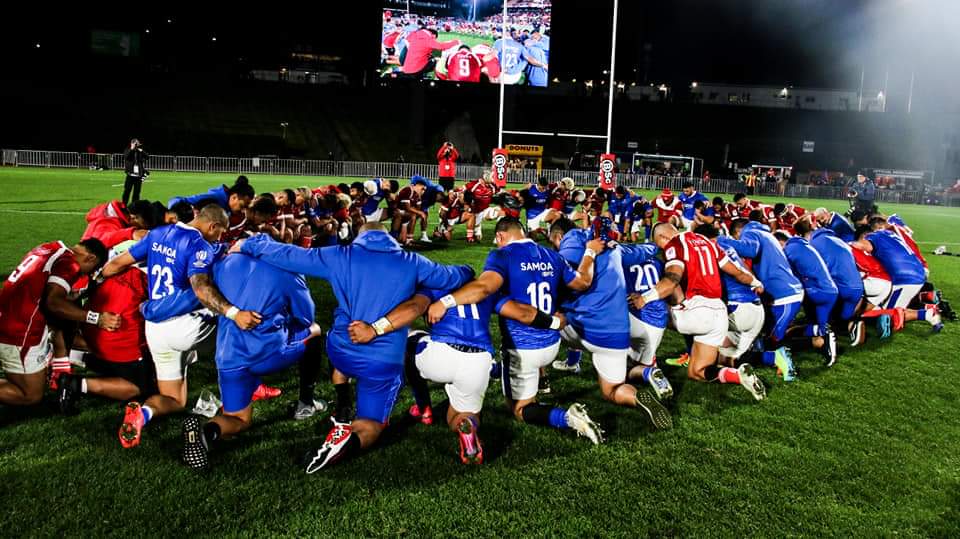 All the momentum with the Manu Samoa now and they weren’t going to let the Ikale Tahi off easy.

Tomasi Alosio put a clearance kick in, which he then followed up with a great tackle. A counter ruck earned Samoa possession and all they had to do was put it through hands to the left side. Stacey Ili crossed for Samoa’s last try of the night.

With a 29 point advantage, Tonga now have to beat Samoa by 30 or more points to qualify for Rugby World Cup.

The second test match between the Pacific brothers will be next weekend in Hamilton.