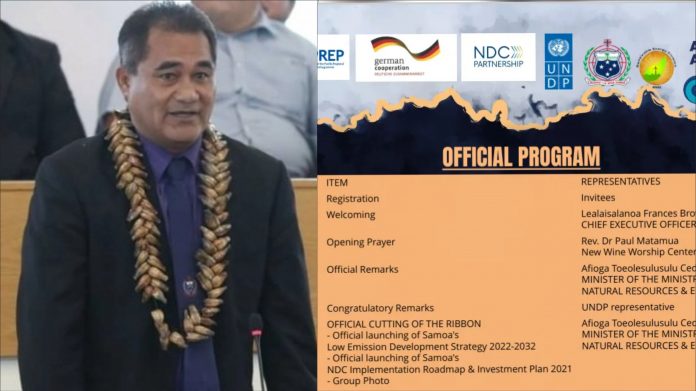 Samoa, through the Ministry of Natural Resources and Environment (MNRE) will be launching its “Low Emmissions Development Strategy 2022-2032”. The event has been announced to be held at the Lava Hotel from 6pm – 10pm on Wednesday 11 October with Rev Dr Paul Matamua of the New Wine Worship Center Church to deliver the Opening Prayer before Hon Minister of Environment, Toeolesulusulu Cedric Schuster gives the official address.

Despite its low contribution to global emissions, Samoa’s commitment to global targets to lessen the impacts of climate change and global warming are outlined in its Intended Nationally Determined Contribution (INDC).

INDCs were established as early as 2016 following COP21 in Paris. Samoa’s commitments includes efforts to reduce its Green House Gas (GHG) emissions as well as an ambitious target for Samoa to generate 100% of its electricity from renewable sources by 2025.

The establishement of country INDCs was a core component of the Paris climate change conference (COP21).

It was recognised at the outset that an essential element to the realisation of Samoa’s commitment to climate change mitigation is having a favourable policy environment in place.

The launching of its Low Emmissions Development Strategy is evidence of that policy environment.

Samoa once again demonstrates to the global community, the actions being undertaken by a small and vulnerable country to address climate change despite its low level contribution to global emmissions.