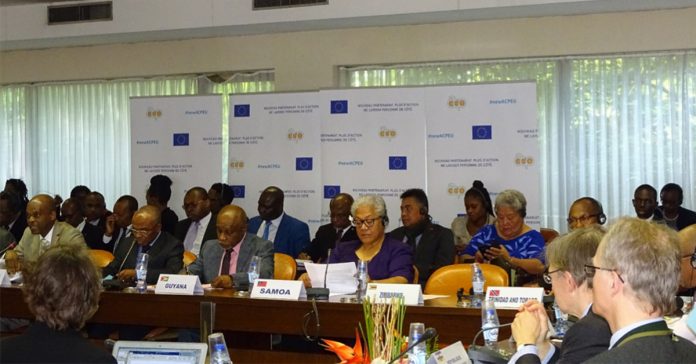 In thanking Council for its decision, the Deputy Prime Minister, Honourable Fiame Naomi Mata’afa noted that “As the ACP Group, we pride ourselves in our unity and solidarity as principled vehicles for securing our common aspirations and objectives. We are also a family that draws our strength and visibility by recognizing and embracing our diversity and the richness of our cultures”.

Honourable Fiame went on to acknowledge with appreciation the support of all ACP member states and the Pacific ACP countries in particular and assured the ACP family that Samoa will not disappoint in its preparations for the signing ceremony. The Deputy Prime Minister was accompanied by CEO Peseta Noumea Simi and Ambassador Fatumanava III Luteru to the Council and the ACP Ministerial Central Negotiating Group. During the CNG and Chief Negotiators deliberations, Honourable Fiame presented, on behalf of the Pacific region, an update on progress achieved in the negotiations for the Pacific-EU regional Protocol. The Samoa delegation also participated in the Joint ACP-EU Council where Honourable Fiame delivered the Joint ACP-EU Ministerial Trade Committee report on the outcome of its 16th meeting held on 26 October in Brussels.

The ACP Group comprise of 48 African, 16 the Caribbean and 15 Pacific sovereign independent states with its headquarters based in Brussels. The Council is the policy making body of the Group and meets twice annually to give guidance to the Committee of Ambassadors and take decisions relating to the effective management of its relations with the EU. The EU’s total financial support under the Cotonou Agreement is over 30 billion euros covering national, regional and intra-ACP programmes and projects.

The full texts of the Deputy Prime Minister’s interventions during Council and the ACP Ministerial CNG are attached.

DPM Statement on Hosting of the Post Cotonou Agreement_22nd May 2019