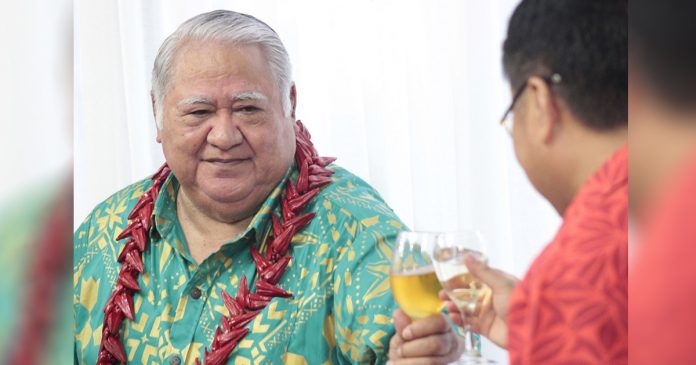 Outgoing Ambassador Wang Xuefeng will be remembered by Prime Minister Tuilaepa Lupesoliai Dr. Sailele Malielegaoi as a unique diplomat who has gone beyond his call of duty to promote mutual cooperation ties between his country and Samoa.

As the People’s Republic of China’s Ambassador to Samoa for the last three and a half years, the Prime Minister noted that Wang has more than embrace Samoans in performing his diplomatic duties as evidenced by his numerous engagements with the wider community that has resulted in assistance and help for locals.

Mostly recently, Tuilaepa also noted the public engagement between Wang and a Member of Parliament.  That exchange said the Prime Minister is a “comedy show” by the MP who is considered as the “Parliament’s comedian.” But Tuilaepa says it speaks volumes for Wang because it reflects his genuine commitment to help Samoa where ever he can in his role as his country’s Ambassador in Samoa.

That said, Tuilaepa added that overall he is impressed and grateful for the contribution by the outgoing diplomat but was quick to remind Ambassador Wang that his duties as Samoa’s diplomat should continue in Beijing.

In his prepared remarks, the Prime Minister reiterated the Government of People of Samoa’s appreciation to the outgoing Ambassador;

“I wish to take this opportunity to thank you Ambassador for your drive to strengthen Samoa China relations during your time in Samoa including your support for the official visit to China for the World Economic Forum in 2018 and the opportunities to meet and hold discussions with President Xi Jinping.

“We also acknowledge the High Level visits by the authorities over the years as well as facilitating ministerial visits to China and the generous hospitality extended to us all.

“I am sure that everyone here join me in extending to you our very best wishes for your next posting.

“It is our hope that you will take back good memories of Samoa.

“May you have safe travels and a safe return home.”

Wang and his wife Mrs. Tong Xin were given a state farewell dinner which they hosted Friday evening attended by His Highness the Head of State, Council of Deputies, the Prime Minister, Deputy Minister, Cabinet Ministers, Diplomatic Corp and Chinese national living and working in Samoa.