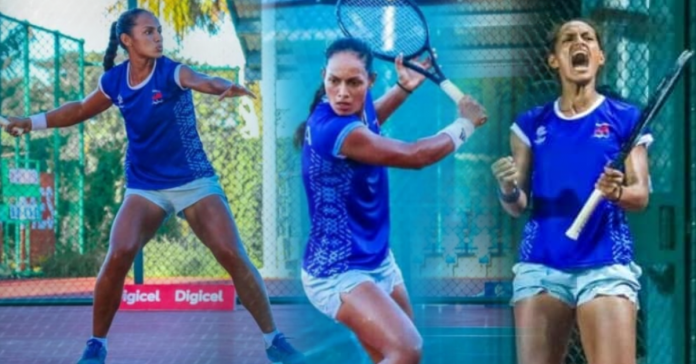 16 July 2019 Pacific Games, Apia Samoa. With contributions by Nanai Laveitiga Tuiletufuga. Samoa’s No 1 ranked woman tennis player is taking one match at a time, focusing only on the day’s task ahead of her as the Pacific Games tennis competition heads into the Women’s Single and Mixed Doubles category this week.

With Samoa yet to win a gold medal in tennis, the nation’s hopes remain with Stefi Carruthers.

“One match at a time, that’s my focus like in any other competition,” says Samoa’s top tennis player.

Although the team succumbed to a strong PNG side, Carruthers defeated the Pacific Games Single Women’s champion from Papua New Guinea, Abigail Apisah.

Stefi’s father Gary Carruthers says that the Tennis Samoa Team is in good spirits and are also good physically but always play better when there is a vocal crowd behind them.

“Confidence is high, but we tend to play harder when we have loud, local crowd support,” said Mr Carruthers.

“It has been a long hard campaign so there is a certain amount of wear and tear on all players but I am 80% sure Tennis Samoa can expect at least another 3-4 more medals.”

Yesterday the Open singles competition for both Men and Women was in full swing at the Apia Park Courts and Stefi put away Ms Tan of the Northern Marianas in 3 straight sets.

Stefi remains focused on the task ahead, with the Women’s Singles and Mixed Doubles continuing into today.

The 26-year old is the defending champion in the women’s single competition having won the Gold medal at the 2017 Vanuatu Mini-Games.

Stefi also won Gold for the Women’s Double with partner Lyla Tapusoa and the Silver medal for the Mixed Doubles division with Leon Soonalole.

Stefi partners with Leon Soonalole again for the Maxed Doubles and will face the PNG duo of Patricia Apisah and Eddie Mera in the Quarter Finals.

Stefi has since represented Samoa to Pacific Games, Mini Games and Oceania Games and has also had opportunity to attend international tournaments as a professional player in the United States.

Tennis was instilled into Gary and Yvonne Carruthers’ household with all 4 of their daughters taking up tennis at an early age. Stefi is the second youngest.

Although her sisters have not pursued the sport, Stefi and her mother continue to play a huge role in Samoa tennis.

Pacific Games tennis continues today for the Singles and Mixed Doubles, having been rained out late yesterday afternoon.