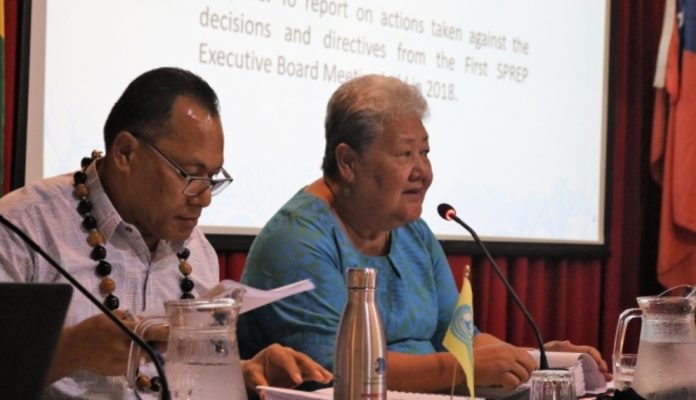 3 September 2019, Apia, Samoa – The first day of deliberations for the Secretariat of the Pacific Regional Environment Programme (SPREP)’s 29th Meeting of Officials commenced this morning at the Tanoa Tusitala Conference Centre in Apia.

The first order of business for the 29th SPREP Meeting was the appointment of the new Chair and Vice-Chair of the Meeting.

H.E. Lucy Bogari of Papua New Guinea, who has been Chair for the last 12 months as well as a Member of the Troika, expressed her sincere gratitude to the Director General of the Secretariat and staff for the support accorded to her during her tenure as SPREP Meeting Chair.

“I would like to thank each and every one of you, and I look forward to working closely with the new Chair.”

The Director General of SPREP, Mr Kosi Latu, gave an overview to the room on the procedure of appointing the new Chair and Vice Chair.

The Meeting invited the representative from Samoa, Chief Executive Officer of the Ministry of Foreign Affairs and Trade of the Government of Samoa Peseta Noumea Simi, who now takes over the reins from H.E. Lucy Bogari as Chair.

Peseta thanked the outgoing Chair for her hard work over the last year, and led the Meeting straight into the deliberations, while encouraging interactive debates and discussions in order to make the most of the short time that is made available to them.

The 29th SPREP Meeting of Officials is being held at the Tanoa Tusitala Hotel in Apia, Samoa from 3 – 6 September.

The Meeting will bring together SPREP’s 21 Pacific island Members countries and five metropolitan Members to discuss strategic issues pertaining to the organisation, and to approve the 2020-2021 work plan. The Environment Ministers’ High-Level Talanoa will be held on Friday 6 September.

The five metropolitan members of SPREP are: Australia, France, New Zealand, United Kingdom and the United States of America.