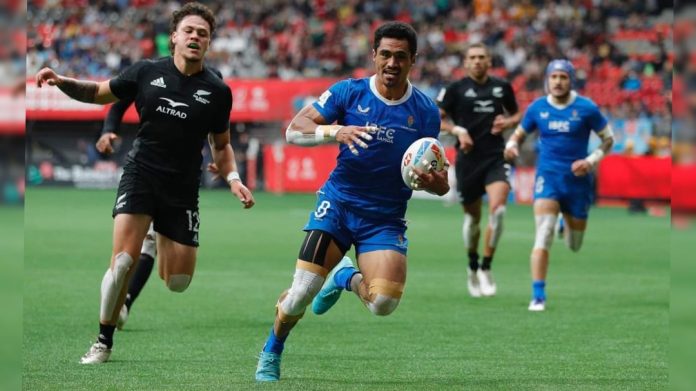 After an impressive win against host nation England in their opening match of the Commonwealth Games, Samoa have taken a 19-17 loss to the hands of New Zealand.

Not many teams are better than Samoa when they keep the ball in hand and after they starved the Kiwis of possession Samoa took a 17-7 lead at halftime.

Paul Scanlan opened Samoa’s accounts straight off the kickoff after Owen Niue and Melani Matavao combined with a slick set piece play to put Scanlan away.

The ever-reliable Apelu-Maliko leaped into the heavens and came down with the ball for Samoa. A quick spread of the ball found speedster Owen Niue who showed off just how fast he is by leaving Moses Leo in his dust to score his first try of the tournament.

Samoa’s defence was at its best in the first half. Despite New Zealand being the bigger team the Men in Blue showed that size isn’t everything in the game of sevens rugby.

Their defence was rewarded when a Kiwi error fell into the hands of Apelu-Maliko. The Tepatasi captain ran over some weak New Zealand defenders to give his side a 17-0 lead.

As we all know, even a 17-0 lead isn’t enough to start relaxing against the Kiwis.

New Zealand had the ball for one minute in the first half and put their first points on the scoreboard.

Off a set piece tap, playmaker Ngarohi-Black put in a pinpoint kick for Sam Dickson to stroll over under the post.

The men from Aotearoa did to Samoa in the second half, exactly what Samoa did to them in the first – and that was to keep the ball away from the opposition.

Samoa lost the kickoff and allowed the Kiwis to spread the ball wide to a speedster of their own by the name of Caleb Tangitau.

Tangitau has been impressive all season for the All Blacks and he was no different here. Tangitau, with his combination speed and power, left 3 Samoans in his rear view mirror before releasing Joe Webber for New Zealand’s second try.

With the match in reach at only 17-12, all the momentum was with the All Blacks.

The Kiwis kept it simple by just finding the fastest man on their team in Tangitau. A quick in and out and Tangitau found himself in acres of space and not a Samoan in sight.

A deserved try to Tangitau but Ngarohi-Black still needed to make the conversion to put his side ahead and that’s exactly what he did.

Samoa will take the tough loss to the Kiwis into perspective tonught, especially after leading 17-0 after the first seven minutes.

The Manu Samoa are still very much in the run for their first Commonwealth medal, having out away England 34-0 in their first match.

At this point it looks like Samoa and New Zealand will advance to the quarterfinal stages. Who will top the pool however will depend on the result of the New Zealand vs England match later on tonight.

If New Zealand win they top Pool A. If England win, It will come down to a points differential between Samoa and New Zealand.