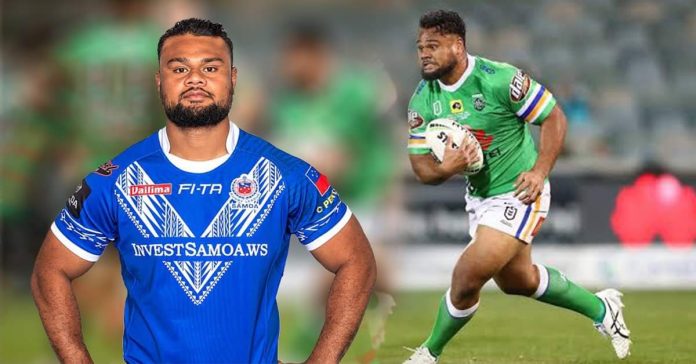 Dunamis Lui has been called up after a big season for the Canberra Raiders; with 10 tackle breaks, 467 tackles, 121 offloads and 1,820 running meters.

This would be the first State of Origin appearance for the Brisbane-born Samoan who made his NRL debut back in 2010 for the Broncos, when he was only 19.

Dunamis would go on to play 32 matches with his home side before moving south to join the Manly Sea Eagles for the 2015-2016 seasons, and St George Dragons in 2016.

The 104kg, 5’11” prop finally moved to Canberra in 2017 and has been a force for the Raiders ever since, playing 78 matches in four seasons and scoring 10 points.

Dunamis is joined by Canberra Raiders and Samoa International Josh Papalii who has played 15 State of Origin matches in his career. Josh Papalii is one of three Samoans named in this year’s NRL Team of the Year.

Daniel M Limā
Daniel is a junior reporter who has just completed high school at St Johns College in Hamilton where he was the Pacific leader and prop for the first XV. He has enrolled to start a Bachelor of Health Sport and Human Performance (BHSHP) at Waikato University.

Tuilaepa Addresses Parliament for the First Time as an Opposition Leader