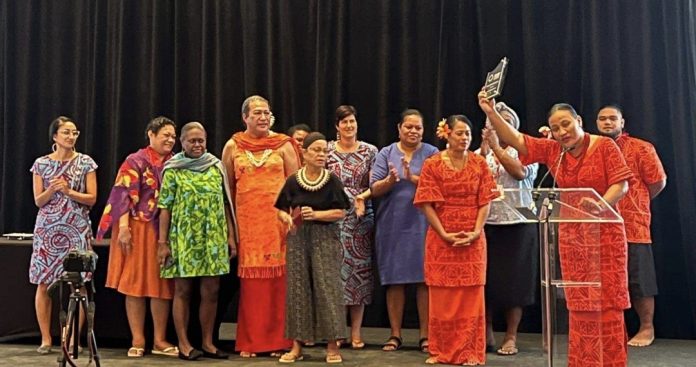 The four walls of the Paradisus Conference Hall in Cancun, Mexico  shook at the sound of the Samoan  celebratory singing as the delegation was called on stage to receive the “Leaving No One Behind” prestigious award of the Global Spotlight Initiative.

Through singing and dancing, both in the Pacific and on the global stage, Samoan women express their love of life, their love for the family and the values keeping the community together.

And on the global stage, they sang for the world to hear that Samoa leads the way in ending violence against women and children.

It’s Sunday, 18 September early evening in Samoa, Saturday 17 September late at night in Cancun, but nobody is sleeping as the great news come out – the Spotlight Initiative programme in Samoa received global recognition for its inclusive dialogue approach around a dramatic reality of increasing numbers of victims of domestic and intimate partner violence.

“In many ways, the award gives voice to the painful silence surrounding victims of domestic violence, women and children who are denied the basic right to a dignified life,” says UN Resident Coordinator in Samoa, Simona Marinescu.

Gratitude and tears of joy overwhelmed the Samoan delegation led by the Chief Executive Officer of the Ministry of Women Community and Social Development, Dr. Mema Motusaga, Co-Chair of the CSO National Reference Group Fagalima Tuatagaloa, Gabrielle Apelu of Apelu Sports representing the Regional CSO NRG and Youth Representative Gutu Faasau, as they gracefully danced their way to the stage to receive the award.

“Finally, Samoa and our efforts towards ending violence against women have been recognised” said Civil Society National Reference Group Co-Chair Fagalima Tuatagaloa when receiving the award.

The Spotlight Initiative in Samoa is a nationally owned programme funded by the European Union through a dedicated partnership with the United Nations to end violence against women and girls.

“The programme continues to achieve results because the Spotlight Initiative Team listened and designed interventions to suit the context of our communities, their level of knowledge and their capacities to deliver”, Fagalima added.

Dr Mema Motusaga, Chief Executive Officer of the Ministry of Women, Community and Social Development added that “the Award recognises the collective effort and partnerships within the Spotlight programme built on relevant policies, grounded on the concept of family, enhanced by cultural and religious values and a load made lighter with everyone committed to ending violence against women and girls as their main goal.”

UN Resident Coordinator Simona Marinescu, cheering from Samoa on social media was highly emotional stating that “the award is the highest recognition of Samoa’s work under the Spotlight Initiative. We have come a long way, yet more is needed for women and children everywhere to live without fear.”

The five programmes nominated for the “Leave No One Behind” Award included Samoa, Liberia, Tajkistan, Honduras and Zimbabwe.

The Award recognises the Spotlight Initiative programme team’s commitment to the Leave No One Behind principle of the 2030 Agenda.