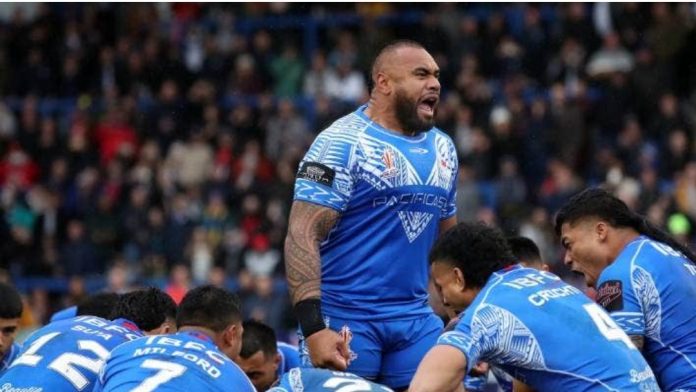 Toa Samoa captain Junior Paulo who was yellow carded in the semifinal for a tip-tackle on England’s Tom Burgess, has been cleared to lead Samoa in this weekend’s World Cup Grand Final.

Paulo escaped a match ban with Burgess offering up his support for the Toa Samoa skipper, by declaring there was “nothing in it”.

Paulo was sin binned in the 13th minute of the semifinal for the infringement but returned to the field to lead Samoa’s historic upset win over England on Sunday morning.

Junior Paulo was put on report but on Sunday night escaped further action by the match review committee.

The Toa Samoa skipper was cautioned by the review committee, while both Burgess and England’s Head Coach Shaun Wane offered their public support.

“He should definitely play the final, there was nothing in it,” Burgess told media in a post-match interview.

“It was just the way the tackle went, I arrested the position, he should not miss a week for that, no way. I was fine,” added the Englishman despite the heartbreaking loss to Samoa on home soil.

Samoa prop Royce Hunt also received a caution for his involvement in the tackle.

England coach Shaun Wane also called for Paulo to be allowed to play in the grand final.

England’s coach was in tears as he addressed the media after the match but when asked, Wane threw his support behind Paulo and said he believed Kangaroos coach Mal Meninga would also want the Samoa captain to play.

Samoa becomes the first Pacific Island and Tier 2 nation to make a Rigby League World Cup grand final and will face the might of Australia on November 19th at Old Trafford.