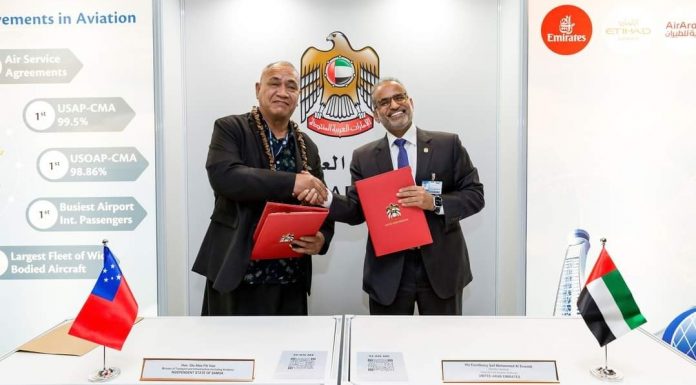 On October 1, 2022, the Independent State of Samoa and the State of the United Arab Emirates (U.A.E.) signed an Air Service Agreement (A.S.A.) which would allow international air transport services between these nations.

This bilateral agreement is important as it will also improve the Accessibility and Connectivity to air transport as States can designate their national carriers to operate flights between their respective countries.

The Honorable Minister noted that in the absence of a large aircraft from our designated national Carrier, this signed agreement allows Polynesian Airlines Limited, trading as ‘Samoa Airways’ to enter into a Code Share Agreement with any of the six designated U.A.E. designated National Carriers.

The Agreement, also opens up opportunities for Code Sharing to be extended to linkages that the U.A.E., has already established with other existing Airlines at the International level.