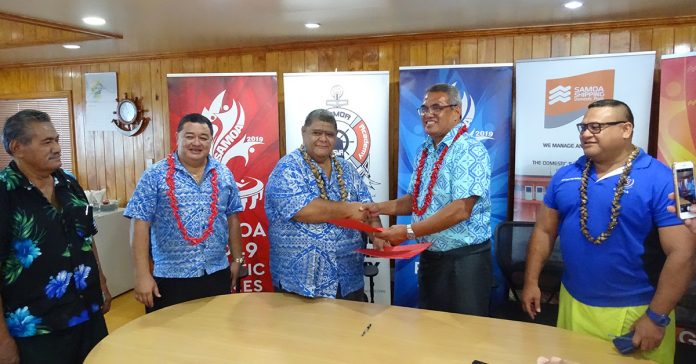 21 February 2019, Apia Samoa. Samoa Shipping Corporation has stepped in to support the Pacific Games by providing sponsorship of cash and in-kind to the value of $500,000 tala.

SSC’s support will assist the boxing team who will be travelling between the two islands with the move to host the sport in Savaii.

Acting Chairman of the Corporation Board, Palea Vaalele Faaolotoi says they are supporting the government mandate of “What’s good for Upolu is also good for Savaii”.

“We are excited to be working side by side with the committee of the Pacific Games,” says Palea.

He also encouraged the Savaii community to ensure they support the sport during the event.

He added part of the $500,000 will go into ferry fares of the athletes and Management.

Chairman of the Pacific Games and Minister of Sports Loau Solamalemalo Keneti Sio acknowledged the support of the Corporation at a handover ceremony held today.

“The money is no small amount and we will ensure it will all be put into great use especially towards the boxing federation,” he said.

President of the Samoa Amateur Boxing Association Papalii Poloa last year said “It is important for Savai’i to host such an event and for people to know that what is good for Apia is also good for Savai’i.

He added Savaii has a selection of good hotels and other upgraded facilities that can cater for big events as witnessed by members of the Pacific Games Committee during site visits.

Twenty six sports have been confirmed and while most sports are conducted within the vicinity of Apia, Boxing and Open Water Swimming will be held outside.

The Games will run for two weeks from 7-20 July 2019 and the Ministry of Education Sports and Culture (MESC) has been tasked with the preparation of the opening and closing ceremonies.