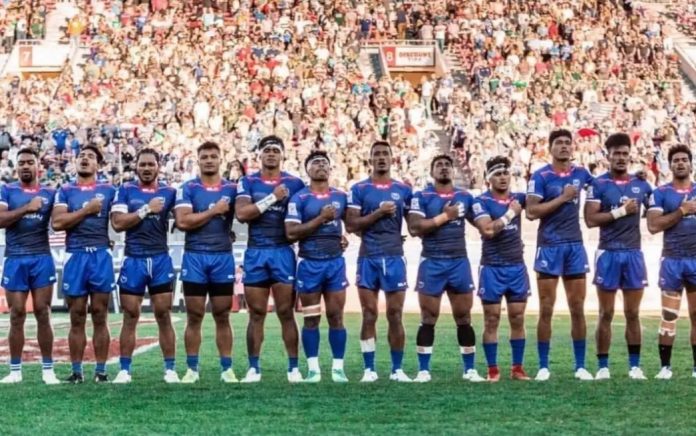 The Manu Samoa Sevens team is looking to play warm up games against the New Zealand Sevens later this month as part of their preparations towards securing Olympic qualification at the Oceania Sevens tournament in Fiji, scheduled for early November.

Having failed to secure a medal on home soil for the Pacific Games, the Manu Samoa Sevens are now focused on the one Olympic spot up for grabs at the upcoming Oceania Sevens.

Fiji and New Zealand have already qualified for the Olympics through the HSBC World Rugby Sevens Series where they finished first and third.

Samoa finished sixth, three points ahead of Australia putting the two countries as favorites to compete for the one Oceania position for the Tokyo 2020 Olympics.

Tietjens is contracted to the Samoa Rugby Union to the end of the 2020 Olympics in Tokyo.

“My goal as I’ve always said is to get Samoa to the Olympics.”

“Players were selected from their performances during the Bluesky Series and were invited to participate in testing and trials,” he said.

A training squad has already been selected with seven new players joining existing team players to make up a 24 man squad.

Recovered from injury, David Afamasaga also gets the nod for the training squad along with returning sevens team members John Vaili and Kirisimasi Eteuati Savai’inaea.

“Current sevens players have been in training since July and the full training squad are now preparing for their New Zealand training camp starting October 12th until 25th,” said Manager Poulos.

At the conclusion of the NZ Training Camp the Squad will return to Samoa where the Team for Oceania 7s will be announced before leaving for Fiji on the 2nd November.

Poulos said there is a very important goal for the team at the Oceania 7’s.

“The management and players will be doing all we can to achieve Olympic qualification in Fiji and there is a good mix of experience and new blood in the team with some exciting new potential,” he said.

He offered a big faamalo and fa’afetai to all our families, friends, major stake holders/sponsors & of course the fans for their continued support.

The Oceania tournament runs November 8th and 9th and the final Manu Samoa Sevens team for the 2019/2020 HSBC World Sevens Series will be announced afterwards.