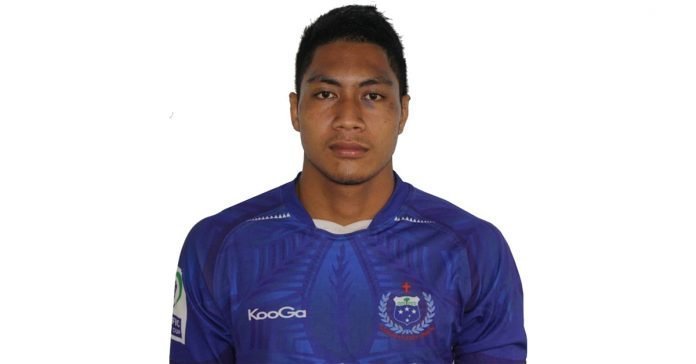 Faiva Tagatauli is survived by his wife Seutatia and their 4 year old son. Seutatia’s mother, Sieni says that it is a devastating loss for her daughter who is 6 months pregnant, expecting the young couple’s second child.

The Vaimoso team Manager Tauiliili Polito Vili said that Faiva had called out to him, wanting to be substituted 30 minutes into the 2nd half of their match against Vailele last Saturday.

“There was no visible incident that led to his injury. When the maul disbursed, Faiva stood up and that was when he called out to me.”
“He walked of the field, came around to me and said that he was not feeling well.”
“He was given water and ice, but not long after that he collapsed.”

Tauiliili said that the ambulance was called and the ambulance staff had worked on Faiva for some time before he was taken to the hospital where a visiting neurologist performed surgery after x-ray showed internal bleeding in his brain.

“The doctors waited for Seutatia to arrive and sign off before they took him into surgery.”

“The result of the x-rays showed that there was internal bleeding on the right side of the brain, and the doctors said that it was lucky we were able to get him to the hospital on time.”

“This is a very sad loss for the Vaimoso Rugby Club,” said Tauiliili.

“We have been by the side of his family offering our support and giving some money to help with expenses.”

“Faiva had not played all of last year, and this was his first game of the season. He loved the game of rugby, and this is a sad loss,” added Tauiliili.

The Secretary of the Apia Rugby Union, Tafaoimalo Laifa Vaoiva Petersen, says that they are in close contact with the family and will be offering their assistance.

“The Apia Rugby Union will be offering support and monetary assistance to help Faiva’s family with costs. We know that Vaimoso Rugby Club is also going to do the same.”

This loss will be felt throughout the 11 clubs of Apia Rugby Union and across the rugby family of players, “ said Tafaoimalo.
“All matches this Saturday will observe a moment of silence, and I know that Vaimoso will be bringing everything they have to the shield match in dedication to Faiva.”

“Apia Rugby Union conveys their deepest condolences to the family of Faiva, especially his wife and son, as well as his family.”

The Rugby fraternity is in mourning after a 27-year-old Apia Union rugby player died early this morning from a head injury during a rugby Game last Saturday at the HPU Rugby Field in Tuana’imato.

The flanker with less than 10 minutes from the end got to his feet and left the field unaided and wanted to be replaced. In attendance to assist him in the sidelines was where he lost consciousness.
The emergency service was alerted immediately to revive and stabilise him before the ambulance transported him to the National Hospital.”

“Faiva is believed to have fallen into cardiac arrest  and has spent four days in the High Dependency Unit fighting for his life.”

Samoa Rugby Union CEO Faleomavaega Vincent Fepuleai said, “Our thoughts and prayers are with Faiva’s wife Seutatia, and their son as well as their family at Fagamalo at this time. We also express our condolences to the Vaimoso Rugby Club who have lost a popular team mate.”

“We will do all possible within our means to offer the support in this difficult time.”

“The Union prioritises and recognises the importance of player welfare.” “We work closely with the Rugby Players Associations and World Rugby to ensure training and awareness programs are rolled out through match officials, coaches and administrators.”