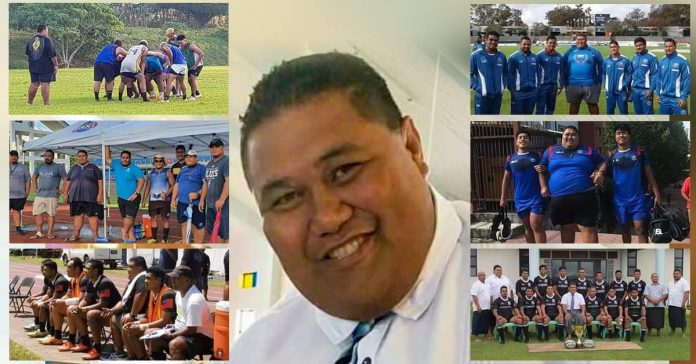 The heartbreak settled into the Vaiala Ulalei rugby family last night as the club met to discuss whether they would be playing the second day of the Vodafone National 7s tournament, without Coach Rudy.

Laauli Rudy Leavasa collapsed at his Vailele home while the family were having dinner last night, and was rushed to Motootua hospital by ambulance. The man who loved rugby with a passion passed away just after 7pm last night, surrounded by his family, his players, his village, and the rugby community who all flocked to the hospital when they heard the news.

Vaiala Club Executive Fuimaono Laifa Petersen said the sudden loss has brought a dark cloud of overwhelming sadness over the club, and especially the players who had just spent the whole day with Laauli, who led them through 3 pool games at the ACP Marist Stadium.

“We had a lot of factors to consider, most of all the players who were in shock. At first, they felt no motivation to play the second day without their beloved coach;

“But in the end, the decision was based on what we knew Laauli would have wanted…Rudy would want his players to run onto that field and play their hearts out today,” said Fuimaono.

“Rudy loved rugby more than anything….and he loved his family, and his two beautiful daughters… but sometimes, it seemed as if rugby was first”, Fuimaono manages to smile at the admission.

“There are so many memories, but one that I will never forget was Vaiala’s 2011 win at the Marist International 7s.. It was the first time Vaiala had ever won the Marist 7s and Rudy was a key to that success. He was a coach who was relatable to players, and he had a special way of getting the best out of all our players..everytime…”

BBE Vaiala players will redivert the tragic loss of their coach to a positive; and face up for their quarter final match against Vaitoomuli at the ACP Marist Stadium this morning, and aim to win the 9th place playoff draw for their coach.

Senior players of Vaiala drafted into the Taula All Stars will also be dedicating their cup quarter final match against Tamauli at Apia Park this morning, to a coach who loved and supported them both on and off the field.

Chief Executive Officer of the Samoa Rugby Union Faleomavaega Vincent Fepuleai says this is a sad loss for the SRU and rugby community, and offers his sincere condolences to Laauli’s family.

“Rudy was a low profile gentle giant with a huge passion and love of rugby;

“He was engaged in the recent past as one of our Family of Coaches in SRU’s development sides for both men and women teams”, said Faleomavaega.

“One of Rudy’s greatest attributes as a Coach was he never failed to ask for help and was keen to learn from the other coaches;

“Our SRU family are deeply saddened by the loss, and our thoughts and prayers are with his family,” added Samoa Rugby’s Chief Executive.

Laauli’s deep sense of humility was echoed by members of the Samoa Referee Association who praised his composure as a Head Coach over the years of local competition and weekly tournaments.

Senior referee Alan Aiolupotea says, “Laauli was the best coach in the eyes of match officials; he never complained or swore if his team lost a game. O le a matua misia lava oe uso, rest in peace, gone too soon”.

Social media is flooded with tributes from players, coaches, administrators, referees, friends and family whose lives were touched by the man described as having a “larger than life personality on and off the field”.

During the recent Taula All Stars tournament SGN  visited a training session of the undefeated Taula South made up of Vaiala and Magiagi. During a water break players rushed to the water cooler on the sidelines. Coach Rudy is seen here standing in the centre of the rugby field, where he loved and lived to be..

Instead of yelling out to players to hurry back, his firm stance and stare from mid-field says it all.

Rest in Peace and Love, Coach Rudy. You will be dearly missed on the sidelines of local rugby matches.