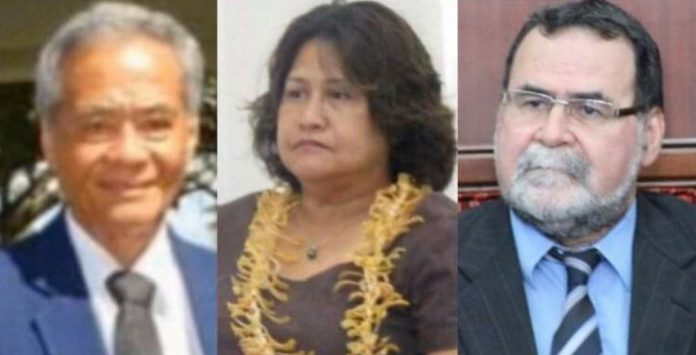 Amidst the uncertainties of a hung Parliament now hinged on a Court decision as to whether there should be 51 or 52 members of the Legislative Assembly, Samoa’s Chief Justice, Satui Simativa Perese has issued a formal statement to reiterate the Independence of the Courts as the third pillar of Government in Samoa.

“I acknowledge we are in a state of uncertainty after the General Election, but I wish to reassure ourselves as a community, that the role of the Judiciary as the Independent Branch of Government is to do right by all manner of people, without fear or favour, affection or ill will..”

The official statement issued late last night comes amidst accusations that the early release of Chief Justice Perese from quarantine was politically motivated, as well as a call by former Attorney General Taulapapa Brenda Heather-Latu in the Sunday Samoa that members of the Judiciary ought to remember their oath. There are also hundreds of defamatory comments by Samoans on social media especially those living abroad, accusing the Judiciary of corruption.

The CJ reiterates, “As sworn members of the Judiciary, we uphold that Oath to the best of our abilities so to adhere to the Rule of Law to maintain peace and prosperity of our nation founded on God.

Released from quarantine with several others last Friday after only seven days in isolation the Chief Justice who’d been undergoing medical checks in New Zealand returned to work at the Mulinuu courthouse yesterday.

“I wish to take this opportunity to extend my sincere appreciation for your support and prayers whilst away on medical treatment overseas in the recent months,” reads the statement.

My family and I are profoundly grateful to the people and government of Samoa and our local medical professionals, as well as the medical team in NZ for your assistance and care.

The role of the Judiciary to interpret and uphold Laws enacted by Parliament has become crucial as Samoa navigates unchartered waters of a hung Parliament following the April 9th general elections. The used-to-be dominant HRPP and the recently established FAST party currently hold 26 seats each.

It has been a rollercoaster ride for Samoa since official results of its general elections had the nation originally in a 25-25 tie between HRPP and FAST with Tuala Iosefo Ponifasio as the Independent member with the balance of power to decide the new government. However, before Tuala could announce he had decided to join FAST, the Electoral Commissioner, four days after official results were released, decided Samoa had not met the minimum requirement for women in Parliament as set out in Article 44 (1A) of its Constitution. A late night Facebook post on the OEC social media page published an Election Warrant signed by the Head of State announcing HRPP’s Aliimalemanu Alofa Tuuau as the 52nd Member of Parliament. Tuala’s decision to join FAST and take their numbers to 26 became only an equalizer since the OEC announcement essentially took HRPP from 25 to 26 seats.

The highly anticipated matter now before the Courts stems from a motion filed by FAST to have the activation of Article 44 (1A) declared as unlawful and unconstitutional, and to declare the warrant issued by the Head of State appointing one more woman to Parliament, as unlawful and void.

Court proceedings continue in the Supreme Court of Samoa this week presided over by Justice Mata Keli Tuatagaloa who has carried the role of Acting CJ for the past six months, assisted by Justice Vui Clarence Nelson and Justice Lesatele Rapi Vaai.

Last December a panel of three judges declared a decision of the Speaker of the House to vacate the seats of Faumuina Wayne Sooialo and Olo Fiti Vaai as invalid and unlawful, ordering him to pay $1,500 talā to each MP for costs.

In November last year, the Supreme Court had only 20 working days to hear and deliver decisions on 20 petitions filed under the Electoral Act as part of the pre-election process.

Former Justice of the Supreme Court Lesatele Rapi Vaai was recalled to assist with election challenges and continues his service today.

This Friday is the closing date for filing of post-election petitions by candidates, where over 20 petitions are already rumored to be anticipated.