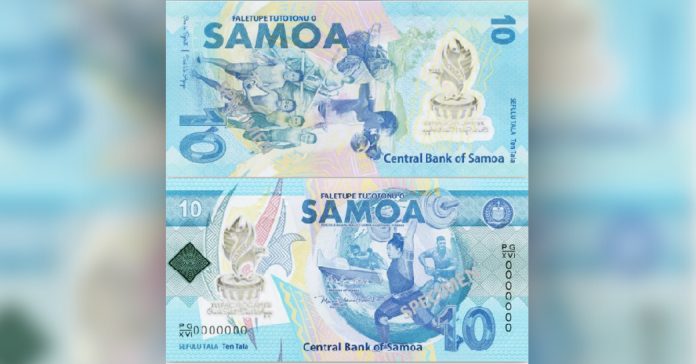 As announced earlier the new note design celebrates the youth of Samoa; the stories of their daily lives and our sporting legacy.

The 10 Tala note will be the second polymer banknote to be issued in Samoa.

The new substrate and security features will help to deter counterfeiting while making it easy to identify a genuine note.

The Banknote will feature a see-through window depicting the Pacific Games logo, and a tactile embossed feature to assist the visually impaired, both are unique features of polymer banknotes.

XVI PACIFIC GAMES
The XVI Pacific Games is reflected throughout the banknote, the Pacific Games logo “One in Spirit / Tasi I le Agaga” is illustrated on both sides of the note, while the Logo is uniquely depicted as a clear window with flames coloured gravure that supports the clear window shape. The standard banknote prefix has been replaced with the special PG/XVI prefix denoting “XVI Pacific Game”

Issuance of the new 10 Tala note will commence on the last week of June 2019, and will co-circulate together with the existing $10 tala which will remain legal tender.